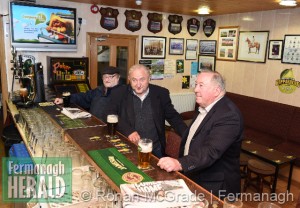 Enjoying a pint in the Old Corner House Bar are, from left, Sean Allen, Jim Sherry and Robbie Thompson RMGFH158

POPULAR Lisnaskea publican, Pat Treacy (77) has decided, ‘like AP McCoy’, to call it a day. He will depart the licensed trade scene with 61 years’ service under his belt, the last 27 as landlord of the Old Corner House in Main Street.

A native of Newtownbutler, Pat’s association with the trade began in 1953 when he went to Belfast to serve his time, and spent 28 years there.

In 1988, he acquired the ‘Corner House’, previously owned by the late Pat Cassidy and, right away, he set about upgrading the premises, with the most extensive refubrishment taking place in 2006 at a cost of over £200,000.

As the sale advertisement indicates, today’s premises are worth a visit, comprising over two floors, an off-sales and late licence, a nightclub and catering licence, and a tastefully kitted out smoking area.

The upper floor, where the nightclub is located, can cater for some 250 people. It comes into its own on Saturday nights and, such is its drawing power, that young patrons from as far away as Enniskillen frequent it.

“Yes, we are busy”, Pat reported. “We open up at 11.30am and we have late opening every night apart from Sunday.”

Other patrons come from across south-east Fermanagh, a catchment area that Pat is familiar with, having played outfield for the Knocks and then St Patrick’s before going into goals. Such was his loyalty to both that he travelled down from Belfast for matches.

And, in the licensed trade itself, he was recently officially notified that, with 61 years’ service, he is its longest serving member.

Already, there have been expressions of interest in buying his premises from inside and outside the county.

So, how does he feel about moving out?

“In a way, I am looking forward to it but, as you saw with AP McCoy on Saturday, I am and I’m not. I would miss the banter and the craic, and I’m that long in the trade I would miss it for its own sake.”

Married to Mary, Pat is the father of eight and, among his grandsons is professional jockey, Ryan Treacy, now back in the saddle following a lengthy injury lay-off.