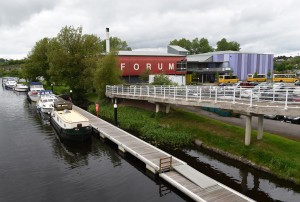 The Lakeland Forum, Enniskillen, scene of the alleged assault.

A MAN has appeared in court charged with sexually assaulting children at the Lakeland Forum swimming pool in  Enniskillen.

Cristian Diaz (33) of East Bridge Street and who is a Spanish national, stands accused of assaulting three young girls, aged between and nine and 11, in the swimming pool on dates between February 24 and March 12 this year.

He is further alleged to have stolen a pair of pink pants and a multi-coloured girls swim suit, valued at £25, on dates between October 1 2014 and March 15 this year.
Through an interpreter, Diaz, wearing blue jeans and a pink jumper, spoke only to confirm that he understood the allegations before him.

Outlining the background to the case, PSNI Detective Constable Gareth Miller told Strabane Magistrates Court on Thursday that all the sex offences were alleged to have taken place in the swimming pool of the Lakeland Forum.

The accusations were made following complaints made specifically on February 24, March 10 and March 12 this year.

The officer said it was alleged that the defendant had sexually assaulted the young girls while under water in the public swimming pool.

DC Miller said that extensive investigations into the matters had been made and that he believed he could connect Diaz to the matters.

A large amount of CCTV evidence has been viewed and a number of Viper identity parades carried out, DC Miller revealed. Diaz had been picked out in one of the ID parades but not in two others, the detective constable said.

He added however that in one reel of CCTV seized on March 12, the defendant could be seen acting “very suspiciously” in and around the Forum.

DC Miller said that the video showed a young girl telling her mother what had happened. As the mother was taking her daughter back into the building, Diaz can be seen returning to the Forum so as “not to be seen by the victim or her mother”.

Explaining how the assaults are supposed to have taken place, the PSNI officer added, “He is alleged to have dived under the water wearing goggles and assaulted his victims.

“His home was searched and a number of items of children’s clothing have been found, which we believe to have been stolen,” DC Miller added.

Asked who the defendant lives with, the court heard that he resides with his brother and that there were no children in the house.

A bail application was lodged by solicitor Michael Fahy, but was objected to by police.

The PSNI said they feared Diaz would go back to his native Spain.

Mr Fahy asked what evidence that suspicion was based on and DC Miller said it was “their belief”.

“But what evidence is it based on,” Mr Fahy pressed.

“It is our belief,” DC Miller replied.

“So you have no evidence,” the solicitor hit back.

Asking that bail be granted, Mr Fahy pointed out that his client’s passport and European identity card had already been seized by police. He also argued that the flight risk fear could be cancelled out by stringent bail conditions.

District Judge Nigel Broderick said that while reluctant, he would grant bail.

“This is a serious matter and I realise it is not a trial but a bail application. I am satisfied however that there is a prima facie case to answer,” the judge said.
A swaying factor, Mr Broderick said, was that Diaz had been on bail for some time and had not breached any conditions.

“With some hesitation I am prepared to accept that police concerns can be met with stringent conditions,” the judge added.

He said the accused would only be released once a £5,000 surety had been lodged with the Court Service. Diaz was bailed in the sum of £750 and electronically tagged.

He was also ordered not to go within 250 metres of the Lakeland Forum and to have no contact with any young person under the age of 18, particularly not in the setting of a private or public swimming pool.

The case continues on May 11 at Enniskillen Magistrates Court.