Advertisement
HomeSportGAA‘He was ahead of his time’, says Donegal manager Gallagher
Advertisement 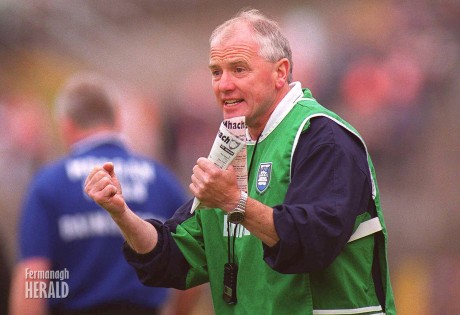 Having made his senior inter-county debut the previous year (under Terry Ferguson), Rory Gallagher, now Donegal manager, became part of Pat King’s squad  at a time (1996) when things were at a low ebb in the county.

He paid tribute to the late Pat King, who died this week.

“Pat came in and revitalised the whole thing after the senor team had taken a heavy beating in the previous year’s (Ulster) championship. He brought in a lot of new faces, the likes of Stephen Maguire (Belcoo) and Paul Courtney (Irvinestown).

“We got a great run straightaway and, obviously, winning the All-Ireland ‘B’ gave us great traction. The training was very tough but very enjoyable as well and, looking back, Pat was ahead of his time as regards the coaching in that a lot of the work we were doing wasn’t dissimilar to what we are doing now.

“It was a very enjoyable period. We had a fair level of results because, right enough, he took us on at a time when, probably, a lot of people didn’t want to. He brought a lot of pride back to us.

“As well as the All-Ireland ‘B’, we won the Dr McKenna Cup which, back then, was a much more competitive tournament and, of course, beating Tyrone in Clones in the final meant a lot to us because they were double Ulster champions at the time.”

Rory also recalled seeing Pat King scoring a goal for Lisnaskea Emmets against Erne Gaels when he was in his 40s (Pat only stopped playing when he was 46), and how, when they met in retirement, he had always admired how he kept in shape.

“I had heard he wasn’t well and I got a shock because he was that fit. Yes, very sorry to then be told he was dead. My sympathy goes to the three boys.”