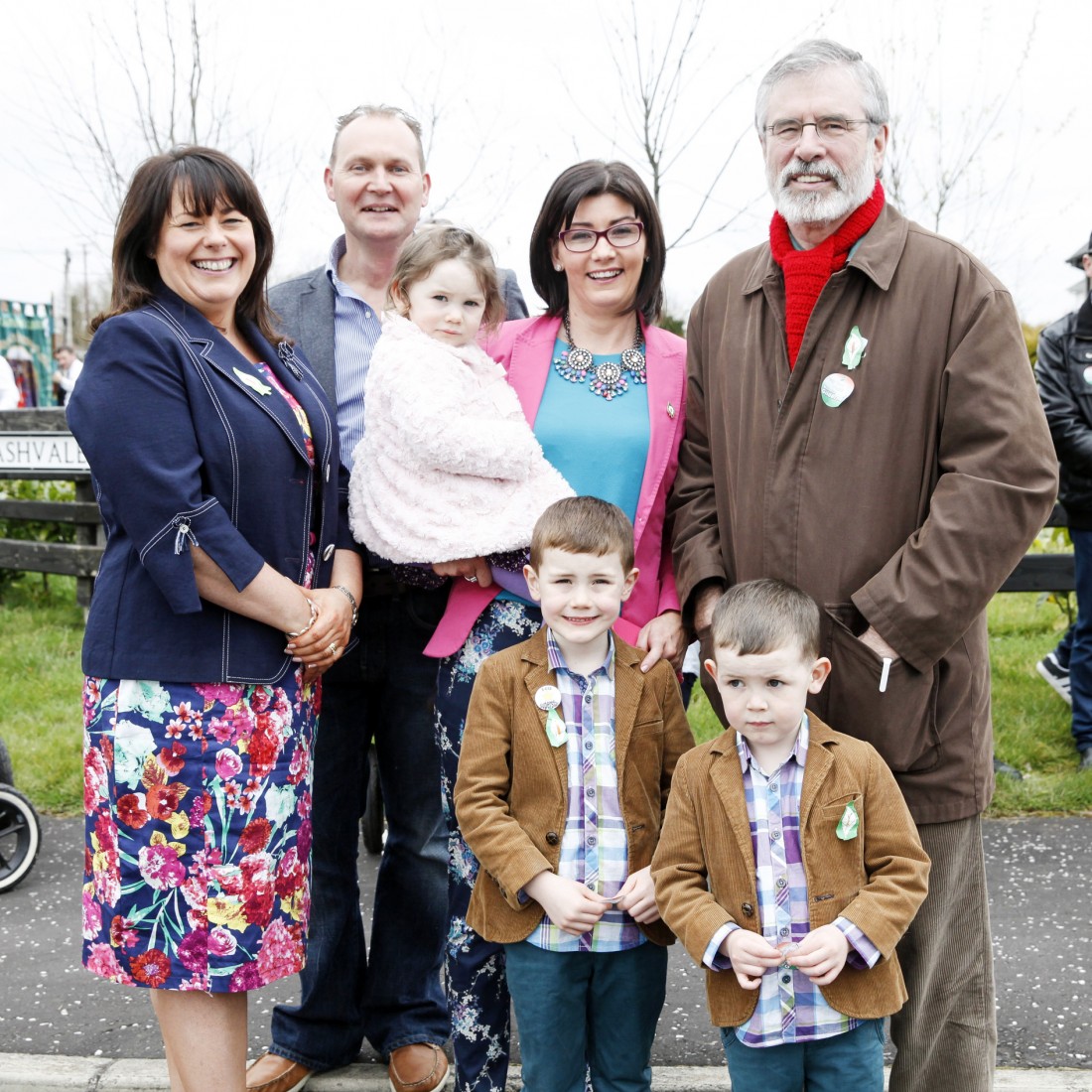 THE President of Sinn Fein, Gerry Adams, speaking at last Sunday’s Easter Rising commemoration in Roslea, asked his audience: “would you like to be the person who failed to vote for Sinn Fein in this election and saw us lose by one vote?”

Having earlier introduced the sitting MP, Michelle Gildernew who won the last (2010) Westminster by four votes initially and then by one vote on a recount, he said the main target of the DUP/Unionist pact (’this grubby little deal’) was Fermanagh South Tyrone.

The several hundred- strong parade, led by the Mountain Road Pipe Band and a colour party, formed up on the Lisnaskea Road and made its way to the assembly point at St Tierney’s graveyard behind the monument to the three Roslea martyrs executed for their part in the 1798 rebellion

Mr Adams recalled how the three, John Connolly, Brian McMahon and Patrick Smyth were hanged in Enniskillen jail on 12th October, 1797, and he also named those, locally, from succeeding generations who had died for the republican cause.

There was no marked police presence, Indeed, march stewards diverted traffic entering Roslea from the Monaghan Road direction while the parade was making its way through the village.
The master of ceremonies was local Erne East councillor, Brian McCaffrey, while Jimmy Cosgrove read the 1916 Proclamation and Oliver McCaffrey read the Fermanagh roll of remembrance and roll of honour.

Local Sinn Fein MLA, Sean Lynch laid a wreath of behalf of the republican movement and Kathleen Fitzpatrick recited a decade of the rosary in Irish. Two laments were played by a member of the Mountain Road Pipe Band.

Referring to the DUP/UUP pact, Mr Adams said the main objective of the two parties was to take the seat off Michelle Gildernew,

He commented: “ In no other constituency does the broad principle of every vote counting carry such relevance.

“So, we have a job of work to do and it is vitally important – and it’s not about Sinn Fein or Michelle Gildernew – it’s about not going backwards. It’s about going forwards, about building a progressive future.”

“It is up to every single republican, every single person who has benefited from the peace process to come out on May 7th and, if we do that, Michelle Gildernew will carry on as part of the largest number of MPs elected in modern times.”