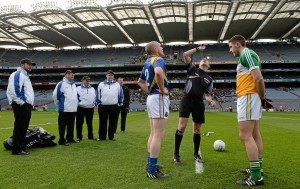 While the Belleek whistler has reffed All-Ireland club seven-a-side finals, this was his first call up from Croke Park for a national final.

“I was down in Limerick about ten days ago when I got the phone call,” said Cullen. “I checked with my umpires [Dermot McGloin, Mickey Ferguson, Rossa Cullen and Darren Cox] to see if they were available and they all came back straight away and said they were. I suppose having the Fermanagh game after was an extra bonus because most of them were going up to the game anyway.”

The day itself could hardly have gone better for the Fermanagh official with the two Leinster sides serving up an entertaining and high-scoring battle. And while the Belleek man had to flash some cards, there wasn’t much room for contention in those decisions, earning good reports in the Sunday press.

“I was up good and early because I didn’t want to be stuck in traffic,” said Cullen. “I was told who the two lines men and the fourth official were and I was very happy they were guys I knew and who I’d worked with before and wouldn’t let me down.

“The whole experience was brilliant. Both teams went out and played football so there was no big issues or controversy.”

Cullen recently lost his father, Tom, a renowned Fermanagh Gael, and it was unfortunate he wasn’t present to witness what was a proud day for the Cullen family.

The panel of 18 referees who will take charge of this year’s football  championship games has been announced and while Cullen isn’t in that group, he is on the tier two panel which provides support officiating.

“My experience in the championship will be as a sideline official and as linesman. I’d hope to get out in as many games as possible,” said Cullen.

Cullen also gave his thanks to the many referees in the county and those from further afield who wished him well in the past few weeks.