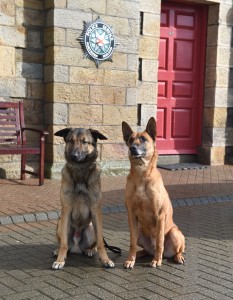 HE HAS spent his career catching over 20 criminals and rescued a missing elderly man who was discovered partially clothed, suffering from hypothermia in a ditch.

But now award-winning Tach, one of Fermanagh’s top police dogs, is to retire and will be swapping a life catching the county’s criminals to catching a well deserved rest.

To top off his policing career, his handler, Keith McCabe, revealed that the nine-year-old’s first ever ‘catch’ some six years ago was also the same person he caught a few weeks ago in his last ever chase.

Keith, a 44-year-old constable dog handler who is based within the F district, which covers Fermanagh, has been Tach’s policing partner for six years. The pair have found missing people, chased three criminals over a two-mile stretch while the Belgian Shepherd (Malinois) has protected his handler from countless assaults.

New to the Fermanagh policing scene is two-year-old Quinn, who is nine weeks into a 12-week training course to become the next top dog.

They cost the PSNI thousands to buy and train but Constable McCabe believes there are a priceless asset.

Speaking about Tach’s career, he said: “He’s been a real cracking dog, he’s found vulnerable people. When he first started he found an 83-year-old man who had Alzheimer’s who walked away from his house in Newtownbutler. He had been missing for four hours so we went out to home and we found him five hours later, partially clothed with hypothermia in a ditch near his house.

“The police helicopter couldn’t find him so if it wasn’t for Tach we would not have found him. Fortunately the man recovered.

“Tach has located criminals at the end of tracks, he has caught criminals who have been running away from police. He has probably caught around 20 criminals that wouldn’t have been caught. His first catch in June 2009 and his last catch a couple of weeks ago happened to be the same person.

“He will be badly missed.”

There are around 32 handlers across the PSNI with three based in Clogher.

“I’ve always been into dogs and always trained dogs so I was always interested in it,” he explained. “Malinois are a really workable breed, they are really quick across the ground and very agile animals.

“General purpose dogs cover anything from tracking, so when someone runs off from a car the dog will follow the track they leave on the ground, to missing people, which has been some of Tach’s best results in finding vulnerable people.”

He also explained when they decide to bring in Tach during a search. “If there’s a low likelihood of finding the person in normal means, particularly in darkness, we try then and use the dog. Fermanagh is perfect because it’s rural and very unlikely you will find someone else’s scent.

Victim recovery dogs were also used in the search for missing Monaghan man, Kieran McAree whose body was found three weeks ago.

After his retirement, Tach will live with Keith as a family pet. “It’s the best kept secret in police and is definitely the best job to be in and it’s fun to do,” he added.