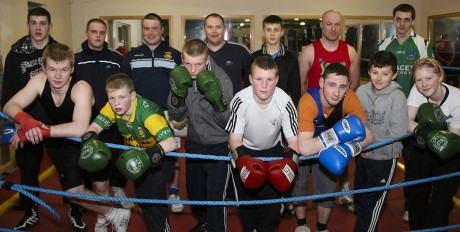 Members of the Derrylin Boxing Club

A CLAIM  by Erne Boxing Club (formerly Derrylin Boxing Club) that Sport NI which distributes grants is biased against sporting groups in rural areas has been rejected by Sport NI.

The club said it was ‘feeling very upset and let down by Sport NI’ in that, despite having a project that scored above the quality threshold, it had been declined funding for a second time.

Its spokesman said on Facebook: “What hurts more this time than our previous rejection was that we had incorporated all their (Sport NI) previous feedback and had invested over £1,000 in running a pilot project for proof of concept and to validate our project’s potential.”

“We would love to know where the funding went, and on what it’s been spent.

“We had a genuine project that would have developed new activities to benefit the community as well as meeting core funding aims of increasing participation in sport and integrating marginalised groups.

Unfortunately, we’re based in Fermanagh and rural communities are less important or significant in the eyes of grant assessors.”

A spokesman for Sport NI, in response to our query, said Derrylin Boxing Club had requested funding of £8,637 for a project to develop another sporting activity (judo) that would cater for participants of all ages, including boys/girls, people with a disability and ethnic minority communities.

“Derrylin Boxing Club’s application was for funding to defray the cost of coaching, equipment and provision of an introductory programme in schools.”

Asked on what grounds was their application rejected, the spokesman explained that Sport NI had £375,000 to distribute under Round 2 of its small grants programme.

“Unfortunately, this meant that 315 applicants were disappointed, including many good projects, such as Erne Boxing Club, who had exceeded the programme’s quality threshold (pass mark).”

She added that Sport NISNI had since provided additional feedback to the club and had advised them that Round 3 is due to open next month.

The spokesman flatly rejected a suggestion of bias.

“Over the last four years, we have invested approximately £1.4 million in 31 projects in Fermanagh  and we are currently working in partnership with a number of projects and organisations in Fermanagh.”