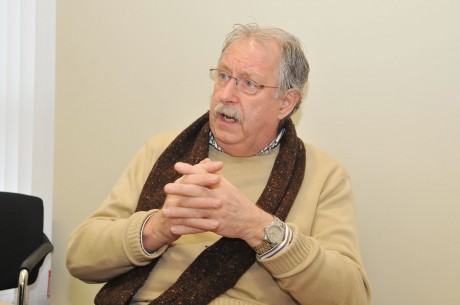 UNIONISTS have been accused of engaging in pre-planned political grandstanding after every DUP and UUP councillor left the Fermanagh and Omagh District Council chamber on Monday night ahead of a debate on the right of Irish citizens in the North to vote in the Irish Presidential elections.

The Sinn Fein motion, signed by 13 of its councillors, called on the Irish Government to set a date for a referendum on extending the right for ‘citizens in the North of Ireland and the Diaspora’ to vote for the President of Ireland.

It followed a Convention on the Constitution in the south of Ireland during September 2013, where 73% of convention members voted ‘yes’ to the question ‘Should citizens resident in Northern Ireland have the right to vote in Presidential elections’.

The motion, read by Omagh Sinn Féin councillor Marty McColgan and seconded by his Fermanagh colleague Cllr Barry Doherty, sparked a heated exchange between UUP councillor Alex Baird and council chairman Thomas O’Reilly of Sinn Fein at the end of meeting at The Grange.

Cllr Baird had called for the motion to be struck out, arguing that it bore no relevancy to people of the Fermanagh and Omagh District.

But admitting the motion to proceed, the chairman stopped the Enniskillen UUP councillor in his tracks, informing him standing orders did not allow any further debate.

That precipitated a walkout by all unionist councillors present, leaving the motion to pass 19-0, with the backing of the SDLP and Sinn Féin.

Speaking afterwards, Carrickmore Sinn Fein councillor Barry McNally accused unionists of “grandstanding” and claimed the move by the DUP and UUP had been pre-planned.

“It was obviously pre-planned, this move. But I’m still scratching my head wondering why they left the room. This was the democratic process in action. It was a motion submitted by 13 councillors, which has a direct bearing on citizen of the area.

“In my opinion it was political grandstanding, clearly there is an election coming up and really that’s all I think it was about.”

However Cllr Baird hit back, denying unionists had walked out. He said his research suggested that the motion was “irrelevant and improper” – claiming it was inconsistent with what had actually been proposed at the Convention.

“The motion that was worded last night did not reflect the spirit or letter of the proposal that went forward from the Constitutional Convention,” he said.

On the wording of the motion, Cllr Baird said the ‘North of Ireland’ relates to a geographical area and not a political one. He added that the use of ‘Diaspora’ was vague and did not specify the ‘Irish Diaspora’.

“There was nothing more we could contribute to it, so we left, there was no more business to be done. We weren’t going to sit there and listen to something that we deemed irrelevant.

“It was not a walkout. A walkout is where you throw the dummy out of the pram and don’t state your case. We stated our case and then because we deemed it to be irrelevant, we withdrew from the chamber.”