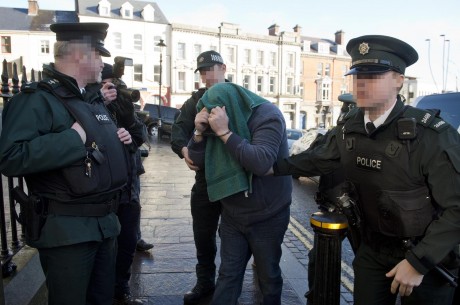 A FATHER and son charged with the murder of a 63-year-old man at a wedding in Newtownbutler last month have appeared at Fermanagh court.

Barney McGinley was fatally shot outside St Mary’s Church on February 11 in front of his wife and grandchildren, minutes before the bride prepared to walk up the aisle.

His great nephew, 26-year-old William McGinley, also known as Willie, faces charges of his murder and also the attempted murder of the victim’s son.

Patrick McGinley, 46, also faces a charge of murder. The pair are from Lisfarrell, Edgeworthstown in Longford.

Bernard McGinley’s son was shot and injured during the attack.

The pair appeared before Enniskillen Magistrates Court via video link from Maghaberry Prison.

A prosecutor confirmed to District Judge Nigel Broderick that a full file has been requested for April 7. The court also heard that further suspects are to be interviewed by police.

Both defendants did not speak during the hearing, only to confirm their names and identified themselves as ‘Willie’ and ‘Pat’.

The defence solicitor did not make an application for bail for either of the defendants and they were remanded in custody.

The case has been adjourned until April 13 when they will appear before Enniskillen Magistrates Court.