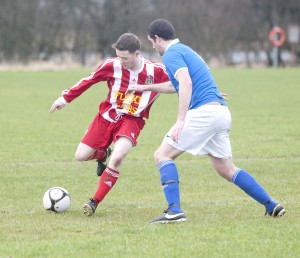 Colin Murray sweeping the ball away from an Orchard City player.

Enniskillen Santos are the last Fermanagh & Western side standing in the Junior Cup following defeats for Strathroy Harps, Beragh Swifts and Irvinestown Wanderers at the weekend.

Enniskillen Santos were also close to the exit door but they managed to muster an 88th minute goal from Jason Keenan to force extra time at the Lakeland Forum having trailed for the majority of the contest, the goal secured 20 more minutes of football and it was the hosts who prevailed, adding goals from Colin Murray and William Gott to set up a last 16 tie away to Tullymore Swifts this Saturday.

It was an enthralling contest according to Santos Manager Joe Keenan who readily admitted his side rode their luck during the first half before dominating the second period and eventually finding a way past the Orchard City goalkeeper.

Orchard City were causing all sorts of problems in the opening half hour and made the breakthrough with just 10 minutes on the clock. Further chances came and went for the rampant visitors who missed a penalty kick during this spell of pressure while Gary Ramsey was forced into a few great saves to keep the score at 1-0.
Santos hadn’t settled and their first meaningful effort at goal didn’t arrive until 40 minutes, Colin Murray seeing a shot saved. At the interval Keenan made a change, introducing Dwayne Beacom on the right wing. He made a difference down that side creating a number of chances for his team mates.

Santos was on top for the majority of this half and were working hard on and off the ball against a very good Orchard City side.

The visiting goalkeeper was proving hard to beat and a magnificent triple save on 70 minutes left the hosts wondering was it going to be one of those days. Jason Keenan was denied by the feet of the ‘keeper, the rebound fell to Stephen Clarke who was also denied before a half cleared effort fell to Conor Tummon which the keeper kept out again.

With 10 minutes to play William Gott was introduced and he set Jason Keenan up before wonderful fingertip save pushed the ball around the post.

The pressure kept coming and eventually Orchard City wilted. Dwayne Beacom’s throw was flicked on by Ciaran Beacom to Jason Keenan and he drilled a low shot through a ruck of players and into the net for 1-1 with 88 minutes on the clock.

In extra time the fresh legs of William Gott proved the difference according to Keenan.

“Willy came on and held the ball up well for us, he put himself about and created the goal for Colin before getting the third himself.”

Orchard City tired over the closing part of the tie and in extra time Santos continued to build momentum. Just two minutes into the first period, William Gott gathered possession and waited for the run of Murray, a neat through ball released Murray who fired to the net for 2-1.

With Orchard City pressing for an equaliser in the second half Santos broke forward after Gott charged down a pass, the block sent him through one on one where he confidently tucked the ball under the advancing keeper to seal a 3-1 victory.