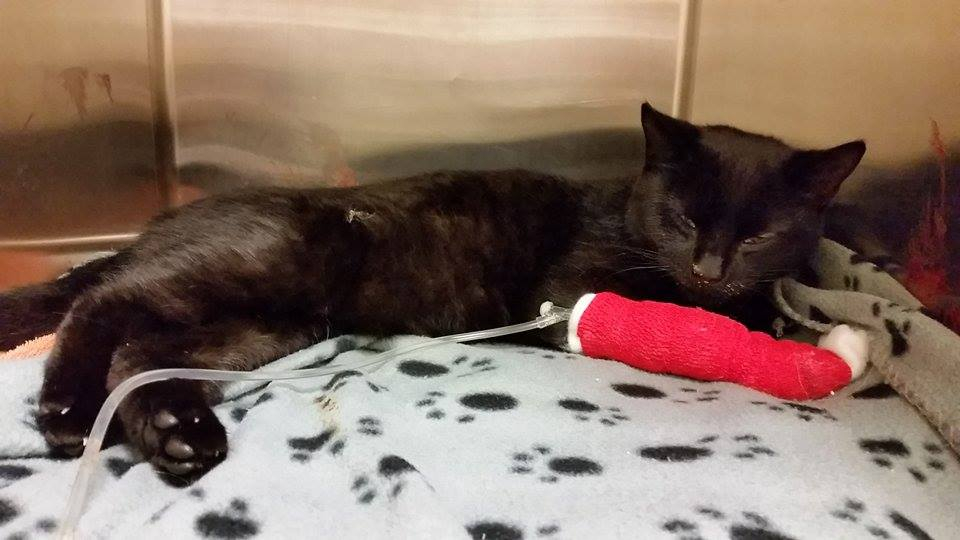 IN A SHOCKING incident of animal cruelty an eight month old cat has been shot dead in an air gun attack.

At around 5.05pm police received a report on Thursday January 29 that a cat came back to its home in the Fortview Park area of Kesh injured, believed to have been shot by an air gun.

She adopted Roy from the Bright Eyes animal sanctuary along with his brother. Carrie came home from work on Thursday afternoon to find Roy lying on the kitchen floor.

“At first I thought he had just ate something he shouldn’t have, he looked sick. But when I went over to him he was really cold, I lifted him and he was really lethargic and limp. I called the vet straight away as I thought he had been poisoned. I brought him to the vet. He was examined, his temperature was very low. It was then I noticed the blood on my hand, we turned him over and there was a small hole in his side, we knew then it was a pellet wound. He was brought straight to X ray where it showed the pellet that had travelled to the other side of his body.”

Roy was given antibiotics, put in a stable condition and was doing well, until his condition worsened on Saturday afternoon.

“The vet called  me to say he had went downhill and that they were going to open him up to see what was going on inside. They asked me to bring his brother in so that they could take blood from him in case Roy needed it. They called me back about two hours later to say that there was nothing they could do to help him, his lung, stomach and liver were too badly damaged and so they asked if they could put him to sleep. And so he was. There was absolutely nothing they could have done to save him.”

Carrie admitted she was heart-broken at losing her beloved pet.

“I’m devastated. Words can’t describe it. I’m a massive animal lover, I had five other cats,  a dog and two horses, most of which are rescued. They’re my family and I live for them.

“The fact that somebody did this, knowing he was somebody’s pet, he even had a collar on, so there’s no doubt he was a pet, really disturbs me. It was unnecessary, he was doing no harm to anybody.

“It has caused me a lot of upset, apart from the fact that I’ve lost my cat, I now have a substantial vet bill to worry about. When it comes to my animals, I’d pay and do anything to make sure they are healthy and happy but when somebody else has caused this unnecessarily, I don’t think I should have to foot the bill. It’s unfair. My cat didn’t deserve this and neither did I.

“Animal cruelty is on the rise in Northern Ireland, it’s regularly in the papers and on social media. People being cruel to animals need to be reprimanded and it’s up to animal owners and the public to make the authorities aware of it if they see it going on.”

“While cats in particular are domestic animals, by their nature they cannot be confined, and generally return to their home after their hunting adventures, so I would ask for people to be tolerant with these pets if they stray into gardens.”

Police enquiries are continuing and it is not known at this stage if the shooting was intentional. If you suspect animal cruelty in your area contact animal welfare on 82 256226 or email animalwelfare@omagh.co.uk