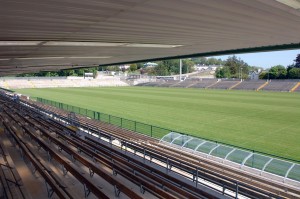 Brewster park could be in the frame to host rugby and soccer if a motion on the issue is passed at Congress at the weekend.

Fermanagh has voted to support moves to allow county grounds to host rugby and soccer in a meeting on Monday evening.

Club delegates and executive committee members met in the Enniskillen Gaels club house to hammer out the county’s voting strategy on the full range of motions on the Congress clár at the Slieve Russell this weekend.

While the Congress motion is aimed at facilitating Ireland’s bid to host the 2023 Rugby World Cup, it will have wider repercussions should it be passed.

In Fermanagh it could open the door for fund-raisers like a game of three halves to be hosted in Brewster Park. For that matter, if the likes of Ballinamallard United or Enniskillen RFC had games that commanded exceptional interest the county ground could also be in the frame to host those. County chairman, Patsy Dolan, believes passing the motion will greatly enhances the GAA’s room for manoeuvre.

“We’re allowing for flexibility and every case will be looked upon on its merits and those decisions will be taken at central level. We’re an open organisation and I think we proved that on Monday night,” said Dolan.

“There was a very good discussion on both sides, for opening and not opening. Obviously there were concerns on future developments, but we also looked at precedents like the opening of Croke Park, which brought a lot of positivity to the GAA. We felt we have grounds that can be used by others at the discretion of the Central Committee in Croke Park.

“Yes, there were questions asked and I’m not saying that anybody was totally for it, or totally against it, but following a thoughtful discussion we decided that we would support the motion.

“We went on the basis that it is only county grounds and doesn’t take into account club grounds and that the decisions are made at a national level. It was felt that on the basis of the long term good of the GAA that it was the right thing to do,” said Dolan.

The move is a tribute to the work which has gone into developing grounds like Brewster Park, now the leading sports venue in Fermanagh, over recent decades.

“The GAA are very proud of the grounds and facilities that they have. And if from time to time those facilities can be used by others, then why not? Providing of course that it comes within the ethos of the Association,” said Dolan.

“The point was made that if we did have a fixture of our own that it would be hoped that the central body wouldn’t come in and say, ‘We’re taking over the grounds,’ but that’s not the point here. The point is that the central committee will check with the local authorities on what the availability of the facility is at a given time, as they do at the minute. That’s a natural part of fixture making at national, provincial and local level.”