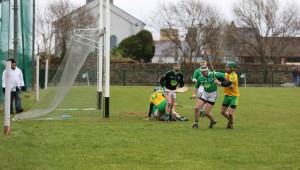 Fermanagh’s hurlers travelled to Ballyshannon on Sunday to take on Donegal in preparation for the visit of Fingal to Enniskillen in three weeks time.

The Erne men were down Portaferry’s Kevin McGarry and 11 other panelists, giving the side a youthful complexion. Meanwhile Donegal were short about five of their regulars including Joe Boyle and Danny Cullen.

Fermanagh trailed by 1-8 to 0-6 at half-time having played with the aid of the hill and the strong breeze.

With both sides using plenty of substitutes Fermanagh got a couple of goals, the first when a long range free from Brian McLaughlin, a Dublin import and son of former Fermanagh football goalkeeper Liam, seemed to go all the way to the net. Fermanagh’s best player John Duffy finished the second ten minutes from the end.
Fermanagh co-manager John Duffy took the positives from the performance.

“Donegal have been training from November and we’re only back three weeks now, so their fitness is obviously going to be ahead of us,” said Duffy.

“Plus the fact we’re a long way short on numbers there today. It gave young lads a chance to impress and a lot of them put their names forward. Davy Teague, Conor McShea, Dave McGorman, when we are back at full strength those boys are going to make it difficult for us to make decisions because they showed up terrible well today.

“Ryan has been with the boys three weeks and fitness is improving. We’re short 12 of our panel today and it told against us, but the boys are putting in a massive effort under Ryan.

“We’re concentrating on Fingal now in three weeks and we’re looking to start the league off with two points in Brewster Park. We’ll hopefully have another challenge next week.

“Longford is one possibility but we’re hoping to get another game before we start the league. We’re happy, we’ve a good squad of 32 and they’re training well, Belfast boys included so we’re on the right track despite getting beat there today.”

But when it comes to goals for the year, there is no doubt where Fermanagh’s focus lies this season.

“That’s our main aim, that and staying in the division and avoiding relegation. If you win your first you could be on the way to a league final, if you lose your first game you could be in a relegation battle,” said Duffy.