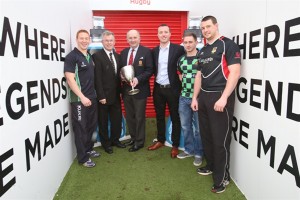 The draw for the semi-finals of the Powerade Towns Cup took place at Kingspan Stadium and sees holders Clogher Valley travel to Ballymena II.

On the other side of the draw Ballynahinch II will be at home to Donaghadee. Both matches will be played on Saturday 14th March.

Clogher booked their place in the last four with a 27-3 victory over Armagh II and are riding high in Kukri Qualifying League 1 in second place.

Meanwhile Ballynahinch II have been in impressive form in the Second XV League where they have highest points scored and lowest points concession of any team in the division despite being a couple of games behind in their programme.

Ballynahinch progressed to the semi-final with a 44-3 victory over Enniskillen.

The Towns Cup is one of the oldest competitions in world rugby with the first final played in 1883.