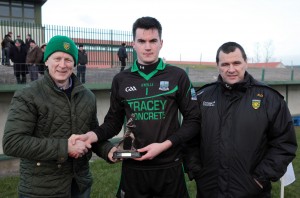 Conor McMahon, Bank of Ireland, Enniskillen presents the man of the match award to Fermanagh goalkeeper Thomas Treacy after the Dr. McKenna group game against Donegal in Fr. Tierney Park, Ballyshannon on Sunday. Also pictured is Sean Dunnion, chairman of the Donegal County Board

Thomas Treacy is a bit hoarse after his 70 minutes calling the shots between the sticks. That minor inconvenience will no doubt be soothed by the man of the match award stowed in the kit bag and a positional quandary posed to Pete McGrath.

The award was based on four outstanding saves by the Devenish man which kept Fermanagh in a match where they were playing second fiddle for long periods. All in a day’s work though as far as Treacy is concerned.

“I suppose I’m there to do a job and thankfully I did it there today,” said Treacy. “I had a bad miss [from a free] at the end, although it worked out alright after. It’s important now that we have another competitive game on Wednesday before the National League. We really do want to push on this year. We’ve put in a lot of work over Christmas and January and things seem to be going the right way.”

It’s Treacy’s second season with the squad and he believes he’s starting to feel a bit more at home on the inter-county stage.

“I suppose last year I might have been a bit overawed about it,” said Treacy. “I worked on a lot of things over the summer and thankfully I’m getting more game time and I’m improving and Liam Swift’s in there as goal keeping coach and he’s been absolutely brilliant. I’m doing some excellent work with him and it’s really paying off.”

One fly in the ointment was a first half where Donegal dominated the centre third and no matter where Treacy put his kick there seemed to be gold and green under it.

“You’re not going to come up against many better midfields in Ireland than Donegal,” said Treacy. “The boys did alright, we lost a right few kick outs in the first half, but thankfully in the second half there was more movement, guys were looking for the ball and things went well.”

Pete McGrath thought his shot stopper was full value for his award.

“Tom [Treacy] got man of the match and they didn’t pull the name out of the hat, his saves were point blank and they certainly kept us afloat when things weren’t going well further out the field. But that’s what goalies are there for, to save shots, and Tom did it very well today,” said McGrath.