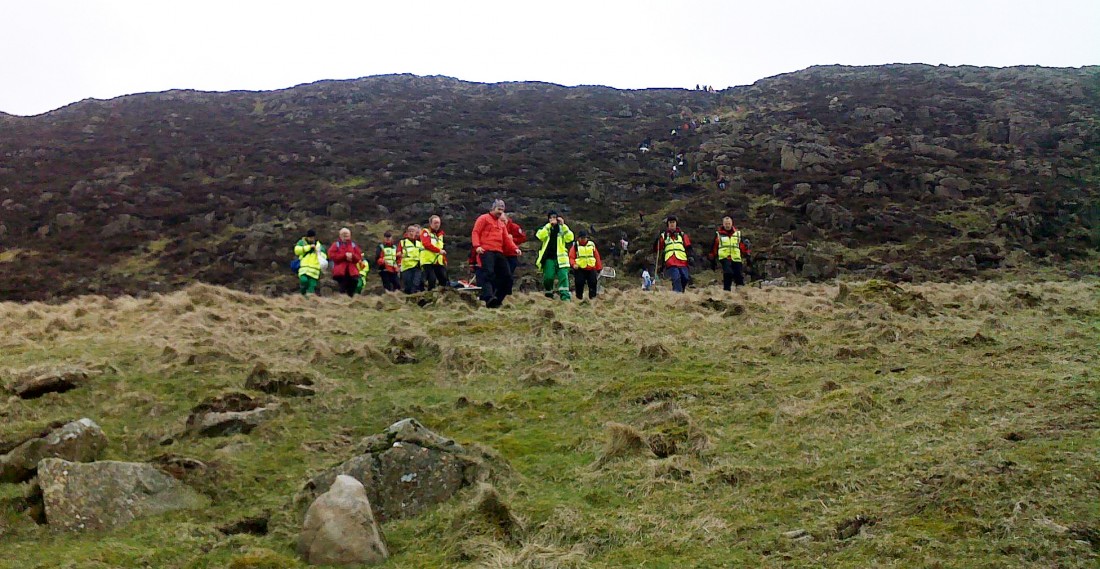 TWO FERMANAGH MEN who went walking up Cuilcagh Mountain on Friday had a lucky escape and had to be  rescued after coming into difficulties near the summit.

The two men, one from Lisbellaw and the other from Enniskillen, both in their late 20s/early 30s had been walking in the Cuilcagh Mountain Park, part of the Marble Arch Caves Global Geopark, up the new boardwalk path when they came into problems due to the weather conditions. They rang police who alerted the North West Mountain Rescue Team, who were then tasked to retrieve the missing men. The rescue team received the call around 5.15pm on Friday regarding the two missing men and although they initially had mobile phone contact with the men, this was then lost due to a drained battery, resulting in a widespread search of the area.

Deputy team leader of the North West Mountain Rescue Keith Thompson told the Herald that 13 voluntary members of the team were involved in the operation, along with the Ambulance Service.

“They hadn’t got to the summit, they were up on the plateau and the mist closed down on them and they got a bit disorientated.

“We had 13 in total searching for them, 12 on the ground and one doing control, sitting beside the phone. We sent one team walking the board walk to search the plateau, a second team was sent around Bellavally Gap from the Swanlinbar side to search along that side, while the third team had a stretcher and gear in place in case it was needed.”

The search team was on the mountain before 6pm and the two men were found just before 9.30pm. They had sustained no injuries and were able to walk down the mountain unaided.

“They were a bit shaken up, a bit embarrassed and you will probably find them on a navigational course soon. But it could have been a lot worse, it was getting on around two foot of snow and it certainly wasn’t warm. You don’t see much of this in Cuilcagh, but it may become more common with this new boardwalk.”

Mr Thompson issued a warning to anyone thinking about climbing Cuilcagh or any other mountainous areas in the county.

“Make sure you have a map and a compass and you know how to use  it and make sure you have enough equipment that if something goes wrong you can survive for a number of hours. In fairness to the two lads they had a reasonable amount of kit and warm clothes and when we found them they were able to walk off the mountain, thankfully we didn’t need the stretcher.”

He added: “ If you do get into trouble you need to remember to call police and ask for mountain rescue, a lot of people think they can call Coastguard, but we are called out by police.”

The North West Mountain Rescue team consists entirely of volunteers and they rely on charitable donations to ensure their good work is maintained.