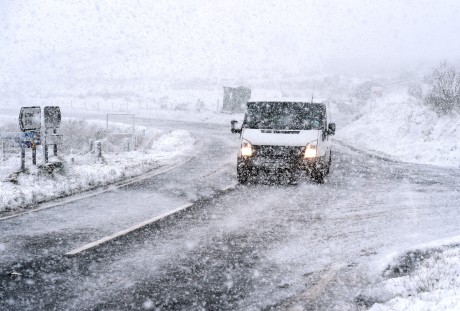 Driving conditions during a snow shower left have been difficult

MORE NEEDS to be done to tackle rural roads in adverse weather conditions, a local councillor has said.

Sinn Fein’s Brian McCaffrey, who lives in Roslea, said that his area has been badly affected by poor driving conditions as a result of snow in the past week.

“For us there’s two roads that would be particularly bad. The road from Roslea to Brookeborough – down to Moane’s Cross. Also the road from Dernawilt from Moane’s Cross. Both of those roads are pretty bad and up through the Knocks. Basically you’re talking about the high ground,” he said.

The councillor said that while he knows main gritting routes have been dealt with by Roads Service, more needs to be done to help rural roads, which, he says, are endangering people’s lives.

“The normal routes are the main arterial routes. They will tell you that it doesn’t justify itself financially doing the other routes. Those routes carry 80% of the traffic, but then that isn’t a lot of use if you happen to live on the side roads or the hilly areas.”

He went on: “It’s been the case for years. It certainly shouldn’t be the case that people are left to take a risk on the roads. They are putting their lives at risk, there’s no question about it.

“If you take any of those roads along upland areas there are significant drops down the sides of them – and a car going into them wouldn’t always be visible.

“The worst times are generally when there is snowfall in any upland area. If it gets compacted on the roads it makes it very difficult to deal with.”