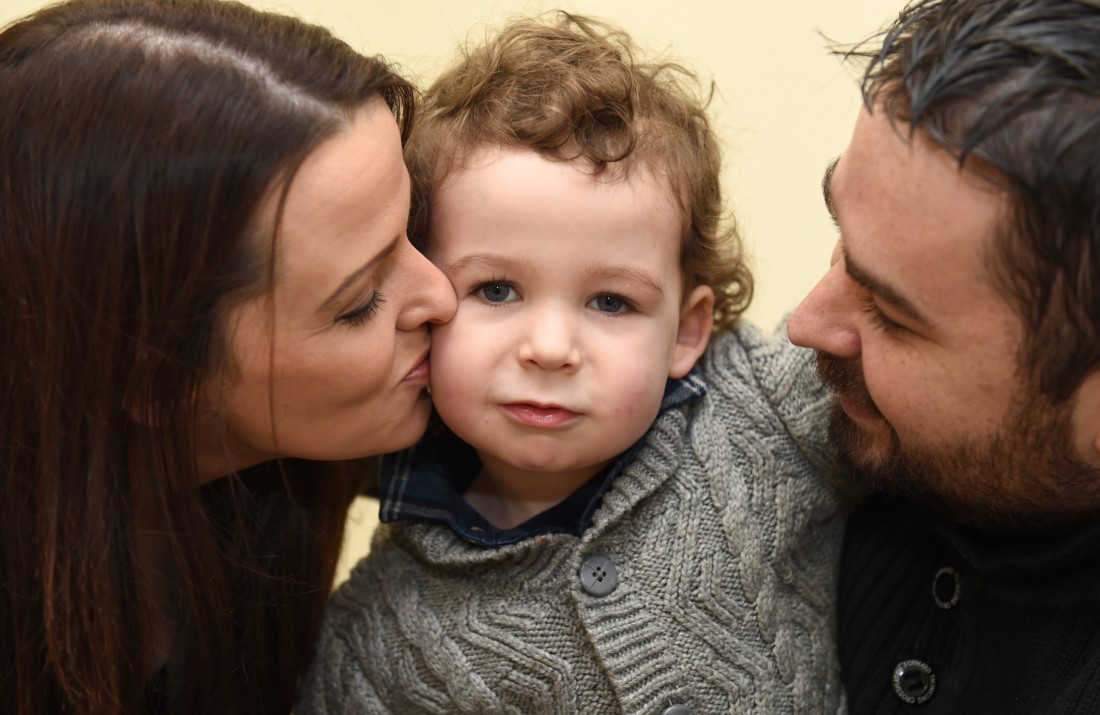 Cillian Donnelly who had open heart surgery just seven weeks ago is pictured with his mum Anne Louise and dad Sean.

JUST NINE WEEKS ON from open heart surgery in the Royal Victoria Hospital two and half year old Cillian Donnelly is fighting fit.

Derrygonnelly child Cillian was one of the last children to receive open heart surgery at the hospital on November 24, after the service ceased on December 16, 2014 and his parents are forever indebted to staff at the facility for their ‘world class’ care.

Cillian was born with an ingrown sternum and a chest X ray later revealed a shadow on his heart. This shadow, discovered at six months, was originally thought to be a ASD (Atrial Septal Defect), a small hole in the heart, which usually goes away in the first year.

Nine months later though they were called back and doctors used a camera to discover the extent of the damage and revealed the distressing news Cillian would require open heart surgery.

Cillian’s mother Anne-Louise Donnelly explained further: “They said it wasn’t the hole in the heart that a lot of children have, Cillian had what they referred to as a Sinus venosis ASD, which meant he had quite a large hole at the top of his heart on the right side and because of that his main artery coming from his neck to his heart, instead of going into the back of his heart it was going into that hole on the right. So it was causing oxygenated blood going around his body and back into the right side of the heart. So it was leaving his blood too oxygenated, too rich in oxygen and the left side of his heart wasn’t really doing much.”

Cillian did not present many symptoms, but was chesty, always had  a runny nose. Anna-Louise and Sean were told both the hole in the heart and the artery would have be treated, which required doctors to stop the young child’s heart, a frightening prospect for the family.

They faced an arduous wait to see if Cillian would be treated in Belfast or they would be forced to make the journey to London. Thankfully on Thursday November 20 they received the call Cillian would have his operation on the Monday in Belfast.

“We were informed 6pm Thursday evening to have the pre op the next day at 1pm and have the operation on Monday” , father Sean explained. Cillian was admitted to surgery at 7.30am and was not out of treatment until 2pm, a full five and a half hours later.

“It was the hardest, scariest thing I have ever done in my life bringing him over. We were thankful though because he was the youngest of the two on the day he was first.”

The operation was originally scheduled for four hours, but due to complications it took longer. The two parents explained their jubilation when they finally saw Cillian after surgery.

“ I broke down,” remarked Sean. “After the four hour mark we hadn’t got the call so that was a worry, but then when we got the call and the relief was indescribable.”

Anne-Louise continued: “It was unbelievable. People think seeing all the machines and the cables is very daunting, but I did a lot of research to keep myself informed and in all honesty when I walked in am I going to break down seeing my own child in this situation and I didn’t, I was so happy to see him, he came off the ventilator before he came out of theatre and you didn’t care about the tubes and wires, it was just the fact he was awake and looking at you and responsive.”

Such is the resilience of Cillian he was eating ice cream just two hours after the operation and now his parents are struggling to keep up.

“You wouldn’t think there’s been anything done to him. After Monday he had the operation, Wednesday he had the drainage tubes taken out, Thursday he was on his feet and then there was no stopping him. You look at him now and you wouldn’t know he recently had open heart surgery. We’re looking forward to getting him back to child care to burn off some of his energy, I think they put 50p in him when they fixed his heart.”

Both Sean and Anne -Louise are forever grateful to staff at the Royal Victoria Hospital and will never forget the world-class service they provided for their son. Although Cillian requires regular check-ups while he is growing, the surgery has given him a new lease of life, allowing full participation in sport and preventing the need for a transplant in the future.

“With the whole of these changes it is disappointing Belfast is closing, because I cannot speak any higher of every single person we came across that helped; nurses, doctors everything, it was world class, it was absolutely fantastic,” added Sean.