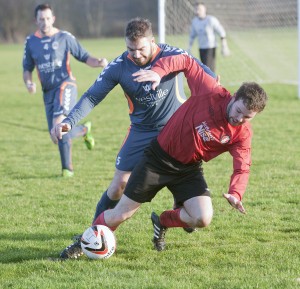 Irvinestown Wanderers failed to capitalise on league leaders Enniskillen Santos first loss of the season at the weekend as they were held to a 3-3 draw with Derrychara at the Lakeland Forum.

The hosts hero was Lee Glass. The talismanic front man, registered all three goals for his side in a draw that helped move them one clear of the relegation places.

Derrychara battled hard throughout the contest and had to come from a goal down on three occasions. Irvinestown made the early running and within eight minutes they took the lead. Chris O’Brien was upended by Carl Morrison and Gary Maguire made no mistake from the spot. The hosts responded within six minutes, Lee Glass running through at ease to slide the ball past TJ McMulkin for 1-1.

It remain level until the break, although Gary Maguire and Christopher Lyons both squandered good opportunities during the half. The second period was just 60 seconds old when Wanderers added to their tally. Kevin Swift and Christopher Lyons combined for the latter to pick out Liam Murphy in the area and he fired a volley past a helpless Peter Phair.

Again, a resilient Derrychara hit back rapidly, Lee Glass fouled by Johnny McGovern and Glass duly converted the resulting spot kick. The hosts worked hard to frustrate Wanderers, but their defence was breached once more, substitute Joey Millar drilling a low shot past Phair on 76 minutes for 3-2 to Wanderers.

Peter Phair was called upon to make a fine stop from Chris O’Brien before his side tied proceedings for a third time with eight minutes left to play. Carrothers crossed for Lee Glass to tap home his hat-trick. Phair saved late on from Millar as the two sides settled for a point a piece.

Afterwards Fred Lynch of Irvinestown said, “We have a great squad and they all know what we want to get out of this season, its heads down, train hard and keep doing what we were doing before the Christmas break.”