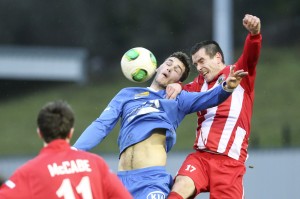 It’s the big one on Friday night. Every Ballinamallard United supporter will be hoping the Fermanagh club can take all three points against basement club Warrenpoint Town.

Manager Whitey Anderson knows it is a must win game if the Ferney Park side are not to be dragged in to the relegation bottom two spot.

“It goes without saying that this is a six pointer. If we get the result then we are seven points ahead, but if they beat us then Warrenpoint will be only a point behind,” said Anderson.

“The players know how important it is. They know winning is important in this one and they know that they have to have the right mentality on Friday night if they are to be successful.”

Even though Ballinamallard’s away form hasn’t been great Anderson is confident his side can get the result they need at Warrenpoint.

“We have to make sure we are prepared mentally. We’re in great shape physically and I’m quite happy with their condition. They have to be prepared for a very tough game,” he added.

Anderson knows that Warrenpoint are on a bit of a high at the moment with a few good results recently.

“The players know what this is about and I have every confidence that they will deliver as a squad,” said Anderson.

“We have good quality players in our squad and we have been hard to beat in most games. I have confidence that they can do the business. It will be important to get a good start and that is what we are aiming for, said the Ballinamallard manager.

Warrenpoint have picked up a few good points in recent weeks and Anderson says it shows a lot about the league at the moment.

“Any team can get results against the top sides on any given day. It’s really about the day. The last time we went up there we started well, but didn’t deserve the result we got.

“This time we must ensure that we are hard and disciplined. We must go there as a team and deliver,” he said.

The Ferney Park side will be without hit-men Johnny Lafferty and Liam Martin, both serving a suspension.

The club is strongly appealing Lafferty’s sending off against Dungannon in the Irish Cup and have video evidence to back up their case.

He still has to serve one game automatically after being red carded, but it could mean he could be back in the side quickly, not having to serve another six for an alleged headbutt.

Anderson though has a pretty strong squad to choose from with defenders Chris Crilly and Colm McLaughlin back in the fray.

Cathal Beacom also returns and Leon Carters and James McKenna will also be in contention for starting places against Warrenpoint.
Defender Beacom released

Defender Nigel Beacom has been released by Ballinamallard United.

The defender has had to give up Irish League football because of work commitments and is moving back to his old junior club NFC Kesh.

Also moving away from Ferney Park is on loan midfielder Raymond Foy.

Foy is moving back to his home club Derry City, but looks likely to move across to Finn Harps.