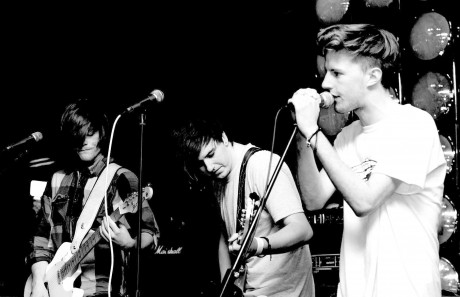 ONE OF the younger bands on the scene at present, Attack The Day, are preparing to release a new EP.

The band – which features – Mark Cadden, Shane McGovern, Daithi Murphy, Ciaran Fitzpatrick and Donovan McBrien – have been on the go since 2012 and after a few line up chances feel they have a solid set up.

Members, aged between 16 and 19, come from across Donagh, Roslea, Lisnaskea and Newtownbutler.

They are currently finishing their EP, and hope to release it in the near future.

“Our lead guitarist Mark is always working on something,” Donovan explained, “so he had a bunch of ideas for the EP around the start of last summer which was when we really started working on it.

“The writing process was good and bad, some days were absolutely great and some were horrible. But it has all paid off.”

“To us, the songs sound absolutely incredible, we are very proud of them and look forward to sharing them with everyone. Safe to say I am
nervous about the response we get. Right now we just need to hear the final mixes of the songs, but one of the vocal tracks on the songs might need to be changed, so we haven’t set down a specific release date yet.”

The EP is tentatively titled ‘Shadows’ – and Donavan admitted that it’s hard to define the band’s genre.

“Honestly we don’t even know what genre we are, nor do we know out style. But for this EP in particular we have been influenced by bands like Sum 41, The Blackout, even in the first track the beat sounds very hip-hop (ish). Right now we have settled on the name ‘Shadows’ for the EP.

“The song names can be really confusing for us, we always call them by their nicknames! But they do have original names now.”

And once the EP is released?

“We are thinking after this EP is released we are going to start writing another soon after, Mark and I have been trying to come up with new ideas for it so we will have to wait and see what happens.”