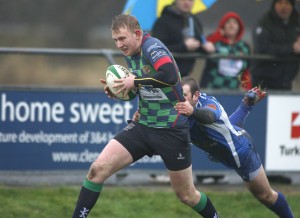 Paul Armstrong gets caught after a 40 metre break.

Clogher Valley continued their winning form in 2015 with 20-6 win against Portadown in a Qualifying League One fixture at a chilly Chambers Park.

Valley began well and Armstrong brought play up to halfway with a searing break. A scrum produced a penalty to Valley which Philip Holme kicked well into the Portadown half. Poor handling by Valley stopped the attack in its tracks but this was rectified when Portadown were again penalised at the scrum. Holme converting the penalty to give Valley a 3-0 lead after eight minutes.

Portadown responded well and were soon back in the Valley half with forwards and backs putting the ball wide to stretch the visitors’ defence. The attack faltered following knock on, but Valley were penalised subsequently and the Portadown out half, Cousins, goaled the penalty to level the scores.

With inspiration in short supply a piece of opportunism from Holme was to lead to Valley’s first try. Receiving the ball just inside his own half, he chipped the ball over the onrushing defence into space. A fortuitous bounce was gratefully received by Armstrong, who was up in support, and he brought play into the Portadown 22 before passing to Donaldson who touched down under the posts on 25 minutes. Holme kicked the conversion to put Valley 10-3 in front.

The remainder of the half saw Portadown on the offensive, but good tackles by Stott and Wilson snuffed out try scoring opportunities for the home team.

Much of the play in the first period of the second half was disjointed with both sides trying to establish some fluency. There was bad news for Valley on 54 minutes when Robinson departed, prompting re-organisation in the pack.

Falconer lightened the gloom with a trademark barnstorming run up the middle a few minutes later. An indiscretion at a ruck by a Valley player on 58 minutes, however, led to a penalty between the Valley 10 metre line and the 22. Cousins kicked the penalty to reduced the deficit to 10-6.

This galvanised Valley who produced their best spell of the match. Their powerful scrum was the launch pad for a series of attacks, with man of the match Wilson making tremendous yardage and providing a target for the support. A bullocking run by Wilson on 61 minutes was a catalyst for a move which brought play from just outside the Valley 22 to well into the Portadown half – with great support by Primrose and Falconer. A scrum ensued with the referee again penalising the home front row and Holme adding the points to extend the Valley lead to 13-6.

With the momentum now with Valley an outstanding tackle by Bennett forced the home team to cough up the ball just inside the Valley half. A sweeping move followed with Valley backs and forwards combining and Alastair Trenier was on the end to touch down for Valley’s second try on 70 minutes. Holme landed the conversion to leave Valley leading 20-6.

Valley held off late Portadown pressure to record their third win from three outings in 2015. Notwithstanding the good start to the year, Valley will know that there is room for improvement in preparation for the second round of Towns Cup next week, at home to Coleraine.