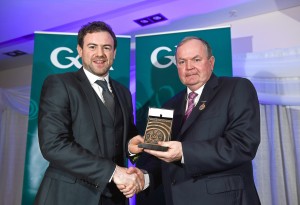 The GAA National Communication and Media Awards, named after ex-GAA president Padraig McNamee, are presented annually in recognition of outstanding contributions made by individuals and Association units in the area of media and communications.

He received his award for his piece in the Belfast Telegraph on Antrim footballer Anto Finnegan. The citation on his award described the piece in glowing terms.

“This is an entry that encapsulates one man’s enduring trauma while highlighting a human spirit that is positively inspirational,” read the citation. “To sustain a business-as-usual demeanour while in the unforgiving grip of Motor Neurone Disease takes a special kind of courage and the backcloth against which the ebullient Anto currently lives his life is portrayed via a heart-warming narrative.

In an era in which pressure on players has seldom been more strongly articulated, Declan’s overview crystallises the satisfaction and pleasure which can be derived from enthusiastic involvement at grassroots level even against personal odds.”

Bogue himself is more self-deprecatory on the piece.

“It was just intended to publicise the game for Anto in Ravenhill,” said Bogue. “He was a good interview subject, clever, very articulate and has a great outlook on his illness and on life. He was told five years ago he would be dead in two years but he’s outlived the prognosis. I enjoyed doing it but I thought no more of it.”

The 35-year-old journalist achieved fame with his book This Is Our Year which chronicled the 2011 championship season from the point of view of players from each of the Ulster counties.

He joined the Belfast Telegraph as Gaelic Games editor shortly after and has played a key role in strengthening the paper’s GAA coverage.
Bogue doesn’t intend to let the grass under his feet and has a new project in mind.

“I have the germ of an idea another book and I’m going to make a start on it later in the year and I hope to have it coming out in 2016. I won’t be on GAA, it’ll be on something different, but it’ll still be on sport.”

He was joined at the Croke Park presentation ceremony by parents Sean and Veronica and his wife Ciara.