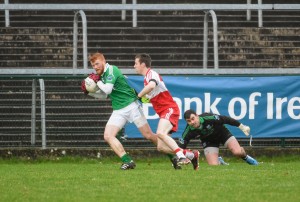 Fermanagh’s James Allen, deals with the pressure near his team’s goal.

James Allen is the strong silent type. That’s great if he’s your full back, slightly less good if you are hunting a post-match quote.

The Kinawley man put in another impressive stint on the edge of the square in just his second game of senior inter-county football. His reading of the game was particularly impressive as he snuffed out a number of decent shooting opportunities for the Oak Leafers.

Vital interventions in a contest as closely contested as this one was.

“I was just working hard and keeping at it,” said Allen. “The way we’re playing you get a lot of cover and there’s a lot of men back so it’s not too bad.

“I just try and read things as best I can. An away game for ourselves the next day and it’ll be another step up again.”

But if Allen wasn’t one to blow his own trumpet, Fermanagh boss Pete McGrath felt no such reticence in praising his full back’s man of the match performance.

“He’s an under 21; 18, 19 I think,” said McGrath. “Full back is an intimidating position for any player, but for a young player to go in and play as well as he did, and he played well last week [against Queen’s] as well, that’s very very encouraging.

“It’s a question of him working at his game and us trying to make him an even better full back. But he certainly played exceptionally well today.”
Barry Mulrone was also full of admiration for his defensive colleague, and highlighted the added vim that all the younger players introduced to the Fermanagh squad in recent months have brought to the panel.

“James keeps himself to himself and sticks to his business,” said Mulrone.

“He got man of the match there and he’s just very very very steady. There’s no hassle out of him. Eamon McHugh did very well too until he went off injured unfortunately. It’s good to see Tomas Corrigan back out again today too.

”The new boys are bringing a breath of fresh air into it. A couple of the older boys left last year and we’re just trying to bring them through and they’re doing the business,” said Mulrone.