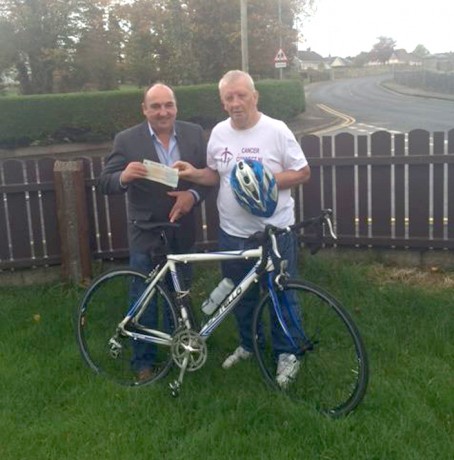 A BELLEEK cyclist has travelled the length and breadth of the world for the past 30 years raising thousands of pounds for charity. Peter McDonald, who lives in Belleek has been on the bike since 1982 raising vital funds for various charities.

The retired landscape gardener’s adventures have spawned thousands of miles and taken him across Ireland, Jamaica, Canada and further afield. When Peter travels to Brazil for a charity cycle in October this year he will have raised the grand sum of £62,000.

Peter’s most recent fundraising effort brought him to Vietnam and Cambodia from October 4 to October 15, 2014. He cycled 350 miles in a group of 53 with riders from England to raise £2,000 for Cancer Connect NI.

Peter told the Herald that a cancelled trip in June spurred him on to tackle South East Asia.

“I was supposed to go to Kenya in June with Marie Curie, but I didn’t get in time so decided to do Vietnam for Cancer Connect.”

As well as his International exploits Peter has cycled all across Ireland including the daunting Malin to Mizen Head challenge. When asked how he got the bug and why he decided to start cycling 33 years ago the 65-year-old said it was simply his love for the sport.
“Some people love football, it’s their sport, well I love cycling, I love what I do. I get on the bike and get away to different countries and raise money. I make a lot of friends too from it, I absolutely love it.

“People say to me Peter you have enough done, but I just can’t get enough of it. I have been everywhere, I don’t turn down a cycle. Once I have got the information I will do it, it’s my life.”

On October 18 of this year Peter will travel to Brazil for a charity cycle to raise money for Macmillan Cancer and looking further into the future he hopes to return to Vietnam and Cambodia to raise funds for Women’s Aid, Enniskillen.