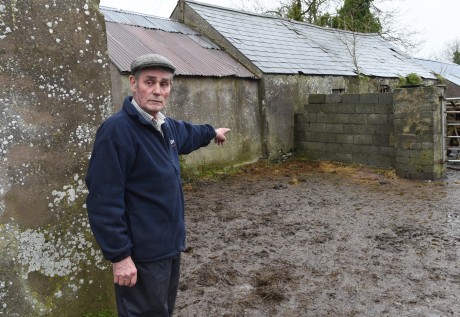 TRAGIC.. The late Robert Brown’s neighbour, Bertie Kerr, shows the Fermanagh Herald where the body of the decesased was found early on Sunday morning.

THE farming community across Fermanagh were shocked at the death at the weekend, at a yard on his farm near Ballinamallard, of 71-year old Robert Brown.

And, tributes have been paid to a man described by one neighbour, Bertie Kerr, a former councillor, as, ‘one gentleman’.

A spokesman for the Health and Safety Executive, Northern Ireland confirmed they are investigating Mr Brown’s death.

A PSNI spokesman confirmed that the body of a man in is 70s was found at a farm at Mullaghmeen Road, Ballinamallard on Sunday last, 30th November.

“Police examined the circumstances. However, at this time, the death is not believed to be suspicious. Health and Safety Executive representatives have been informed, and they are now the lead investigators.”

What seems to have happened is that on Saturday, the deceased, with the help of two neighbouring brothers, Mervyn and Tom Elliott, had moved 16 or 17 animals, including a bull, into a yard near the family home where he resided, in Knockmanoul.

The animals were due to be TB tested on Monday.

The neighbours then left him and Mr Brown carried on working.

Mr Kerr said that would have been typical of the deceased: “He could have put the animals into a house but, to save him the bother of moving them again on Monday morning, he put them in the yard.

“His sister (Pearl Margaret), who lives in a bungalow nearby, went down and put on the lights for him whilst he was foddering the cattle. She was going to bed and the lights were still on, but she didn’t go down.”

It appears that sometime in between, her brother was either attacked or trampled by one or more of the animals.

The grim discovery of his body was made the next (Sunday) morning when Pearl brought her brother down his breakfast.

“The light was still on in his house. I knew something was wrong. I rang a neighbour and he came down and found him in the yard, lying among the cattle.”

All day Monday, as news of the tragedy spread, there was a steady stream of people calling to her home to pay their respects. Her only other brother, John, who lives in north Yorkshire, arrived home that night.

Speaking to the Herald yesterday, Mr Brown said farming was his brother’s life.

“It’s extremely sad. He was a hard working individual and he was looked after by his sister who spent a lot of effort helping him out, and he was also helped by local neighbours.

“They have been absolutely superb.”

It was suggested to him that his brother could have chosen retirement, given his age and the demands of the farm.

“No, he enjoyed it. He built up the farm and did extremely well in many ways, although he worked on his own really, but he got a lot of help from excellent neighbours. So, no, I don’t think he had any thoughts of retiring.”

Fermanagh South Tyrone MLA, Tom Elliott, who lives nearby was among those who expressed sympathy to the Brown family.

He said: “Just like the wider community, I was deeply saddened and shocked when I learnt of the passing of Robbie Brown.

“Robbie was a character who everyone liked and had no enemies. He was well known throughout farming circles, especially around the Ballinamallard area, and I knew him particularly well.”

Mr Brown was a son of the late Robert and Frances, a brother of Pearl and John, an uncle of Claire and Lindsay and a brother-in-law of Christine.

At the family’s request, donations in lieu were directed to Ballinamallard Methodist Church.