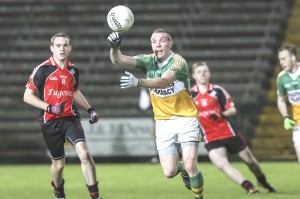 Just 12 months back we were in the throes of final decisions on proposals for league and championship changes.

Agreement was reached to give both competitions a fresh look with the league having an immediate shake up and 2014 saw the appearance of a revamped second/third division set up.

Has it been a success?

Well it has and it hasn’t.

The plus side is that it definitely did keep at least some second division teams in a competitive mode much longer than had become the norm.
There were key fixtures played by middle of the table sides deep into the summer as they battled to make the cut, so this was a definite bonus. On the other hand the third division when it did surface didn’t really catch fire.

Just why this happened is something of a mystery but no doubt those clubs immediately involved in the new look third grade will have their views on that and will have the chance to air them at upcoming convention.

But overall the experiment would have to be deemed a success and hopefully next time around more of the hoped for benefits will be apparent. In any case there is no point in returning to the former format which had clearly outlived its usefulness.

Next up will be the championship changes and here there is a greater sense of anticipation for we have a radical overhaul to whet the appetite.
It’s down to just eight in the senior, one of whom will be intermediate champions Derrylin. Presumably the O’Connell’s will be viewed as underdogs but the other seven will all be fancying their prospects.

However it is the intermediate competition which I would suggest holds the most interest.

This will feature an in depth line-up of contenders for the first time in many, many seasons.

Lisnaskea, Teemore, Belcoo, Kinawley and Newtownbutler are all on the starting blocks for what will surely be a top notch, feisty campaign and a competition which will in many ways be the match of the senior event.

The side which emerges as intermediate winners will surely be in with an excellent chance of making their mark in the provincial championship. For in 2015 there will be a number of sides who will surely believe that they can forge a successful challenge on the Ulster stage.

It has been evident for years that it is the intermediate championship which offers up the best scope for a Fermanagh side to make an impact outside the county boundary.

Lisnaskea blazed a trail with their historic achievement in capturing an All-Ireland title.

Things haven’t been as bright since, but nevertheless there have been sufficient pointers to suggest that the Fermanagh intermediate champions who emerge from the 2015 Erne campaign could give it a right old go in the provincial arena.

This autumn a Derrylin team which, if judged solely on league form and position, was not the strongest side which could have claimed the intermediate title, made a more than decent fist of it on the provincial stage.

And of course we have the re-introduction of the junior championship, a much overdue event giving four clubs a really positive opportunity to capture a championship title that will feel worth winning.

The league revamp may not quite have lit up the scene as brightly as had been anticipated but this championship overhaul certainly will.