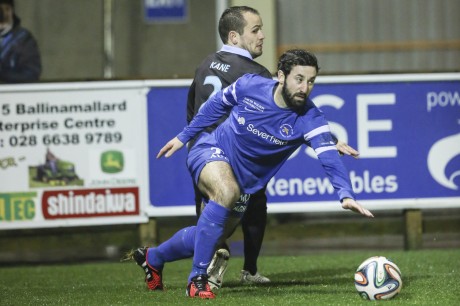 John Lafferty threatening Ballymena early on in the visitors corner.

Ballymena United 3
Ballinamallard United 2
Ballinamallard suffered the pain of a last minute winner tonight in the semi final of the  Wasp Solutions Cup at Ferney Park.
In the final minute of the game referee Raymond Hetherington awarded a dubious free kick in a wide position just outside the penalty box.
The ball was whipped in and David Munster was on hand to connect well to send the ball crashing past keeper McCusker.
But it was the home side who dominated the first half and went ahead after 18 minutes when Ryan Campbell hit a snap shot from the corner of the penalty box to beat keeper Addis at his near post.
The Ferney boys were on top  for most of the half and should have added to their tally when great chances fell to Liam Martin and Ryan Campbell.
But they paid dearly for those misses. A quick throw in on the right flank in the closing minute of the first half allowed Ballymena to break and a quick ball pulled back from the byline saw Allan Jenkins nip in at the near post to finish.
In the second half Ballymena had their tails up and bossed 20 minutes of the half. They added a second after a period of sustained pressure.
From a corner they had a ball cleared off the line and then struck the far post with a stinging effort before Matthew Tipton turned to finish from close range.
But the Fermanagh side began to settle again and were rewarded with an equaliser 22 minutes into the half. Good work between Currie and Martin saw the ball released to the strong running Campbell to fire a low shot into the far corner.
In the final minute of the game a dubious free kick was awarded and David Munster was first to react with a shot to finish past McCusker .
Ballinamallard United
Mc Cusker, Crilly (McKenna), Dykes, McMenamin, Stafford, Hutchinson, Currie (Foy), McCartney. Lafferty, Martin, Campbell