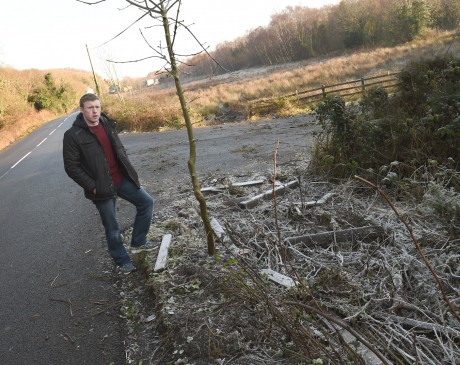 One small tree remains untouched amid the devestating scene along the Boa Island Road. Councillor John Coyle stands at the point where the car left the road before ending up in the field that can be seen in the background.

A MAN who tried to assist the woman who died in a road accident on the Boa Island on Sunday has spoken of the harrowing scene of the tragedy and his regret that nothing could be done to save the  deceased.

The woman died after the car she was driving drove off the road at a left-hand turn. In her forties she is understood to be from north Armagh. The circumstance of the accident are still unclear, but driving conditions across Fermanagh were hazardous with ice lingering throughout the day.

Police can confirm the name of the woman who died following a one vehicle RTC on the Boa Island Road in Fermanagh on Sunday, 28 December as Margaret McVeigh, aged 45 from the Waringstown area.

On Sunday evening, a police spokesman said: “Police can confirm that a woman has died following a one vehicle road traffic accident on the Boa Island Road in Fermanagh at around 2pm this afternoon.”

The local man who spoke to the Herald was one of the first to see the vehicle after it left the road. He spoke of how an off-duty paramedic, on his way to work, came across the crash before the two of them attempted to give aid to the victim.

“A friend of mine came across it and his wife came to me and asked if I’d come and look,” he explained.

“The off-duty paramedic was on his way to work. The ambulance and all was called at that stage. I went down at around twenty past one. It was 11.30 or 12 that night before the scene was cleared. The police were here all day, they had lights set up around the scene, waiting for the recovery to take place.”

He said that he had broken the back window of the car to try to help, and was clearly still shocked as he recalled the incident.

The crash took place between Belleek and Kesh before 2pm on Sunday. The deceased was driving a red Vauxhall Vectra, with the car appearing to leave the road at a left-hand bend.

It is understood that the car hit a telegraph pole before continuing through hedging and a fence. It then travelled through a second fence, ending up in a field, before dropping five feet and stopping.

Local SDLP councillor John Coyle said that the crash took place on a stretch of road that had recently been resurfaced by Roads Service.

Offering his condolences to the deceased and her friends and relatives, Councillor Coyle thanked the locals who had attempted to help.

“The road was upgraded about three weeks ago,” he explained, “it’s about half a mile of new tarmac. The driver was coming from the Belleek direction going towards Kesh. There seemed to be no skidding, it’s strange – it’s a freak accident and I don’t know what happened. I don’t think it was the road.”

He went on: “It was frosty – but this was at 2pm in the day. It was a cool air but there was nice sunshine. The sun would have been shining from early – maybe 10 or 11 until late in the evening. If there was any kind of ice, the sun might have broke it down a wee bit.”

Councillor Coyle concluded: “I’d like to commend the people that went to assist after the crash when they came across – and the ambulance service and the PSNI for the professional way in which they approached the incident.

“My heartfelt and deepest sympathy goes out to the family – a young life has been taken.”

And UUP Councillor Raymond Farrell added: “This is absolutely awful to learn of the death of this woman. No words can adequately express the feelings of sheer sadness we all feel for this family, particularly in the Christmas holiday period. I know the heartfelt prayers of many will be with the family at this time.”