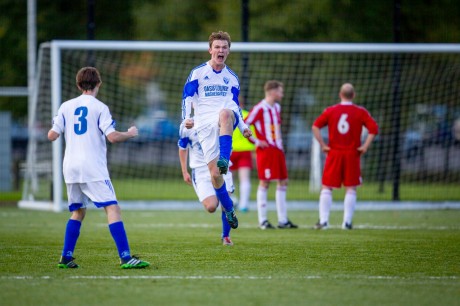 Could this be the scene at the Clones Peace Link Centre?

THE Fermanagh and Western League has backed a bid by one of its member clubs to become the first – post partition – to play their home matches in the Republic of Ireland.

At December’s monthly meeting delegates agreed to a request from Magheraveely FC to support their proposal to play south of the border.

Magheraveely want to establish a new base at the purpose-built state-of-the-art Peace Link Centre in nearby Clones.

Currently no teams affiliated to the Irish Football Association play their home matches in the South.

There appears to be a reluctance by the IFA to sanction such a move but the fledgling Fermanagh and Western club are pushing ahead with a bid to play in Clones, less than three miles from the club’s geographical base.

Officials are in process of building a strong case to take before the IFA and have been boosted by backing from the Fermanagh and Western League.

At December’s meeting league secretary Gerry Connolly read out a letter from Magheraveely requesting their backing and delegates responded favourably much to the delight of Magheraveely officials.

Philip Hutchinson, one of the men behind the audacious move, welcomed the Fermanagh and Western League ‘s support.
“That’s the first step in what will be a long road,“ he said.

Should input from local football’s governing body help Magheraveely build a successful case it will be the first time that a team under the auspices of the IFA will have officially been granted permission to play its home games in the neighbouring jurisdiction.

A few years ago an Ulster Senior League team from Donegal was permitted to play at Derry’s Templemore Sports Complex for a temporary six-month period while Derry City, who compete in the League of Ireland, use the Brandywell Stadium which is based north of the border.

Chairman of the Fermanagh and Western League, Neil Jardine believes a move to Clones would help the development and progress of its member club.

“Primarily we would be looking at it from a development perspective, as a local governing body should,” he said.
“It would certainly be one of the main strands and it would probably help Magheraveely to develop as a club if they were playing close to their base.

“In a short time they have progressed well but this would present them with the opportunity to progress further.

“The move is also a sign of changing times, a stepping away from the Troubles of the past.

“Ten years ago or so you would have had to go through a checkpoint which wouldn’t have been practical.”

The support of the Fermanagh and Western League is a significant first step for Magheraveely but ultimately the decision will lie with the IFA in conjunction with their southern counterparts, the FAI.