Advertisement
HomeSportSports DigestRugbyClinical Instonians get the better of Enniskillen
Advertisement 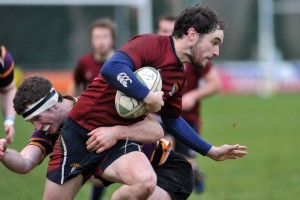 Enniskillen First XV’s spectacular run ended on Saturday with defeat in the semi-final of the Millar McCall Wylie Junior Cup in what was billed as a David and Goliath encounter away against ex-AIL and current Qualifying One league leaders Instonians.

Despite the floodgates opening a little in the latter stages of the game, there was still plenty of pride in the performance.

Despite a bright attacking start from the visitors and solid defence it was Instonians who notched the first points through a penalty inside the 22 metre line.

The opposing out-half continued to put Enniskillen under enormous pressure with accurate kicking keeping Instonians in the opposition half. A scrum within the 22 metre looked to be a tight contest but Skins were once again penalised and Instonians added a further three points.

The Enniskillen scrum however was dominating and following an excellent kick to touch from Nick Finlay in open play, and an ensuing crooked throw from Instonians, Enniskillen had the put-in deep in the opposition half.

The Skins scrum dominated the encounter and were awarded two penalties before the referee had enough and sin-binned the Inst loose head prop. Enniskillen continued to exploit the scrum and an eventual pick and go from number eight Jamie Johnston was touched down under the posts. Unfortunately a knock on was adjudged and relieving the pressure on the home side.

Enniskillen continued to attack well and had a chance for three points before the interval but the attempt drifted wide, leaving the score 6-0 at the half way stage.

The real turning point in the game came from the Instonians restart in the second half which was taken by the home side’s winger, then following a clever kick and awkward bounce near the Enniskillen try line Instonians came away with the ball and shifted it wide for a score in the corner.

Not long after the try Enniskillen were penalised while defending the Instonians maul which gave the home side a further three points. It was more of the same for the next two scores with Enniskillen being penalised and accurate kicks to touch resulting in line outs on the five metre line, Instonians proving too difficult to stop from short range.

The defensive effort remained industrious from Enniskillen with good tackling from Gareth Beatty and pressure from scrum-half Paddy McCleery on his opposite number keeping Instonians at bay. There were plenty of glimmers of hope in attack also with young Conor Hoy and Nathan Richmond looking dangerous and Ashley Finlay almost making a clean break through the Instonians defence, Zach Charlton also was looking sharp under some well placed kicks from Nick Finlay.

Skins were putting all the pressure on at one stage deep in the Instonians half with good ball carrying from David Taylor and Richard Grey following a stolen put-in at the Scrum, only for an unfortunate intercept pass to provide the home side with a soft try against the run of play.
Penalties at the scrum gave Enniskillen the necessary territory and another devastating scrum on the Instonians five metre line followed by a number of pick and goes ended with Jamie Johnston crossing the line for a well deserved try. Inst scored one more try before the final whistle through the same channels of close quarters carrying from a line out deep in the Enniskillen half to leave the final score 40-7.

Coach Norman Richmond was disappointed by the harsh score line but remained proud of his team’s display.

“I thought the team played well and displayed some good quality rugby. Our pack dominated the scrum and the score line flattered Instonians to a degree.

“Yes they are a good team and quite rightly sit at the top of Qualifying One, they displayed a clinical style of rugby that will punish any minor errors. At half time we could have been 13-6 up with two kickable penalties and a try disallowed under the posts, but we just didn’t get the rub of the green.”

Despite enjoying the cup run Richmond was sure to emphasise that the team’s focus is their league standing and that will be their priority against Lisburn on 13th December.

“We now start to refocus on the league with Lisburn and Omagh this side of Christmas and must aim to get ourselves back into contention within the top tier of the league as we have two games in hand to those above us. This team is good and have all the qualities to be able to compete in the next league up.”