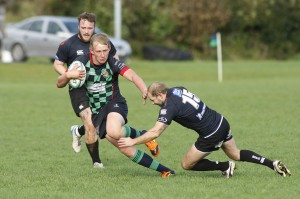 Valley started poorly dropping the kick off and then poorly defending a scrum which saw Cooke engineer an overlap. Luckily for Valley Leinster referee Colm Dawson, impressive throughout, was well positioned to spot the forward pass and deny the try.

Cooke continued to play impressive and intelligent rugby and with out-half Elliott dictating play, continued to pressure an out of sorts Valley side that was missing tackles all around the park. Valley managed a number of pick and goes which gained ground but these were infrequent and it was no surprise when Cooke scored in the corner to lead 5-0.

Cooke continued to dictate the game and scored another try which was converted to lead 12-0 after 30 minutes.

As half time approached Valley started to get some shape to their game, with man of the match hooker Kyle Cobane heavily involved, and made some inroads to the Cooke 22. Here they went through a number of phases before being awarded a scrum. With Moore now having replaced an injured McAleer the Valley scrum drove Cooke backwards and number eight, Wilson, picked up and went over for a try, converted by Armstrong, with the last play of the half.

As the second half started it was immediately apparent that the Valley coaches’ words at half time were having an effect. Valley were much better and started to dominate. Cooke were hanging on but the pressure was so great that they lost a player to a yellow card and then a number of injuries depleted them further.

The Valley pack was now rampant and taking Cooke scrums at will. From one of these the Cooke scrum disintegrated and the referee had no alternative but to award a penalty try, converted by Armstrong, for Valley to lead for the first time after 60 minutes 14-12.

Valley continued to dominate possession and territory but could not break the stubborn Cooke resistance. The Valley coaches changed their back line with Best reverting to scrum half, Armstrong moving to out half and Stott, returning after a serious injury at Bangor on 4th October, back in at full back. The change had an immediate impact and Valley were much more direct and effective. Cooke were hanging on but the uncontested scrums were now nullifying a Valley strength.

With five minutes left Stott engineered a try which would have graced the top level of the game. Receiving the ball at outside centre, at the same time as two defenders, his sleight of hand saw the ball transferred to his winger. He then was able to wrap around, receive the return pass and dive over in the corner for an unconverted try and Valley led 19-12.

Valley closed out the game for a hard fought win with Cooke deservedly taking a losing bonus point.

Next week sees Valley entertain Connemara in the All-Ireland Junior cup at the Cran with a 2.30pm kick off. Connemara are unbeaten this season so Valley will have to be at their best for this tie.