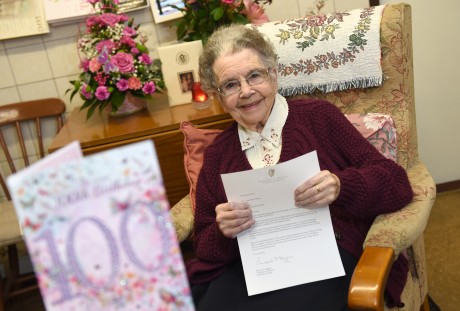 YESTERDAY, Anna Drumm, who lives at Garvery, Teemore celebrated her 100th birthday and, on what was a red letter day, she received two ‘best wishes’ cards, one from President Michael D. Higgins, the other from Queen.

Despite a slight hearing loss, Anna, according to her daughter-in-law, Geraldine, is alert and, while she has only recently lessened her interest in TV, radio and newspapers, she looks forward to people calling.

She was born in Lisnaskea (Murray) and, by the time she met her late husband, Johnny, a farmer she had worked as a priest’s housekeeper in Belfast. In that role, she mastered all the skills needed to rear a family of four, sons John (Veronica), Dublin, Michael (Geraldine), Garvery, Patsy, Derrylin and Gerry (Kathleen), Dublin.

Her late husband, Johnny was from Aghindisert, the neighbouring townland where Anna’s two sisters, Eileen and Philomena Murray live.

Until recently, Anna was a regular attender at bingo in Derrylin and would go into Derrylin to get her hair done. Today, her hairdresser, Pauline McGovern calls every two weeks.

And, she was interested in books and newspapers as well as the tv and radio.

Today, it’s the house callers she looks forward to, people like her good friend, Fr Fintan McKiernan, her local parish priest, and her team of carers who Anna and the family rate very highly.

“She was and still is a very tidy woman”, her daughter-in-law, Geraldine explained. “She was a good cook, brown bread and all that, and she worked on the farm, so you can guess why she has lived for so long.”