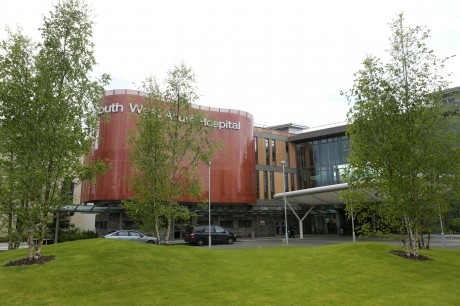 RISING numbers of patients in Fermanagh are being forced to make four hour round trips to Derry’s Altnagelvin Hospital for often routine appointments with hospital consultants – and many frustrated that they are not being seen at the new South West Acute Hospital in Enniskillen.

A raft of consultant led outpatient services are available at the South West Acute Hospital (SWAH) but because the trust says it has difficulty attracting top doctors to Ennskillen, more patients are being sent to hospitals in Derry and Belfast.

The Fermanagh Herald has been inundated with your health stories and hospital experiences following an online appeal.

It has also emerged that a minor tonsil procedure is not available to children at the Enniskillen hospital which is said to have state of the art facilities.

One mother has to foot an overnight hotel bill because she has to take her five-year-old son to Derry to have his tonsils removed.

Within the last 12 months, SWAH had 41,190 outpatients while Craigavon Area Hospital, which is considered to be of a similar size to SWAH, though catering for a larger population, had 128,744 outpatients – three times more than Fermanagh’s hospital.

Some of the services provided at SWAH include orthopaedics, ear, nose and throat (ENT), orthodontics, haematology, dermatology, neurology, rheumatology, paediatrics, geriatric medicine and obstetrics (ante natal). Readers complain, however, that appointments that they would have expected to be catered for in Enniskillen involve long and costly trips to Altnagelvin.

However, one Fermanagh councillor said it was “far from satisfactory” to expect patients to travel for services that are on their doorstep.

“The whole idea of modern medicine is that the care comes to the patient and not the other way around,” Frank Britton stated.

“Patients travel up to two hours for what are in some cases routine appointments.

“These services are best delivered locally and it has the best outcome. It goes against the thrust of community care and local delivery. We have built a fantastic hospital that we should be proud of but there is clearly something amiss when local people are driving past the hospital to travel 60 miles on some of the worst roads in Ireland to get to these services.

“There’s no justification in some of these cases that people are being sent so far away and every week dozens of people have to take a day off work for a ten minute appointment.

“I don’t think the trust’s response, that it’s difficult to get consultants to travel to Fermanagh, is satisfactory and it’s not acceptable to expect patients to do all the travelling.

“We have probably one of the best facilities of its kind in Europe and they should be proud to come down here and use these facilities and address the medical needs of the population. It’s a valid argument that the SWAH is being wasted and it appears that the traffic only goes one way as we don’t hear of many patients travelling from outside Fermanagh to SWAH.

“The trust is choosing to ignore the real quality of the buildings and equipment here.”

A spokesman from the Western Trust made assurances that there are no risks to services at the SWAH and said that it is difficult to attract consultants to rural hospitals.

“Craigavon Area hospital caters for a population three times the size of Fermanagh and Omagh combined so naturally will have more outpatient numbers and more services.”