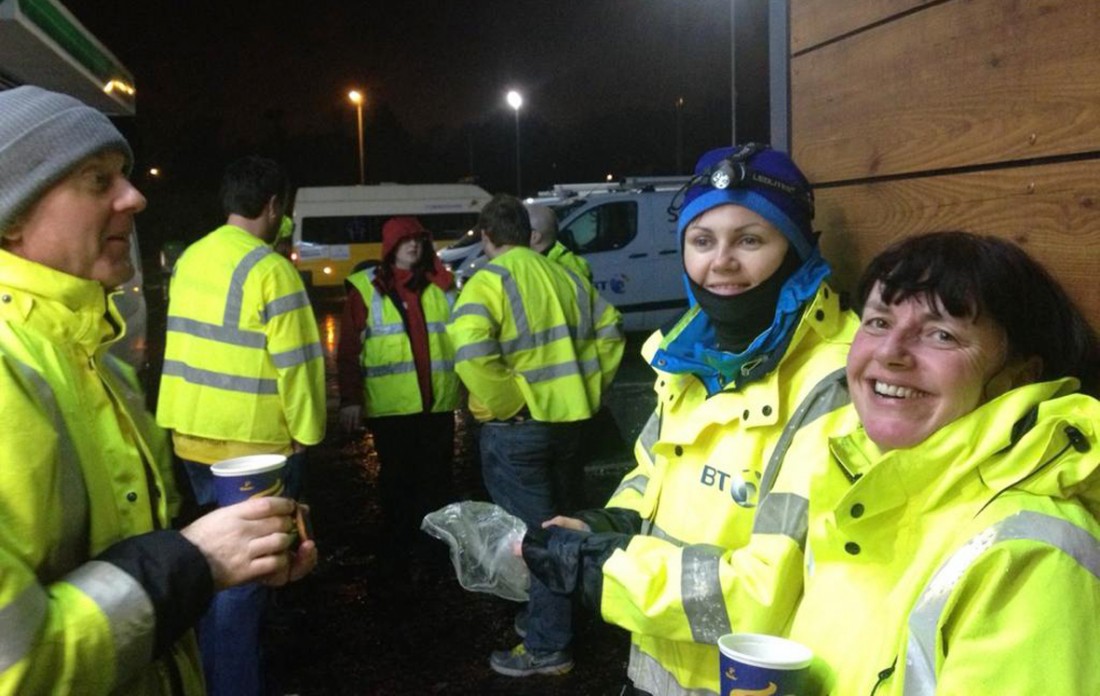 Seamus Wray chats to Joanne McCrory and Theresa Leonard during a coffee break on their mammoth walk from Enniskillen to Belfast.

IT WAS a journey of blisters, aching legs, and pushing through the pain barrier – but ultimately it was one of achievement for local BT staff who completed a 90-mile walk from Enniskillen to Belfast this week, (the shorter route by the M1 is out of bounds to pedestrians).

Sixteen volunteers stepped out of Enniskillen’s BT centre at 8.30am on Thursday morning (November 13), finishing up the following day at around 3.30pm.

The trek is expected to raise in excess of £9000 for Children in Need – and involved around 30 hours of walking.

BT’s Anita Maguire was among the group.

“We knew it was going to be a daunting task. I don’t think any of us were prepared for the weather – it never stopped raining for most of the day and when it did it went from wet to dark,” she explained.

The group would take a pitstop every three hours – with it proving a more gruelling task than first imagined.

Anita went on: “For me there were moments of despair, pure despair – I can’t go on. But then someone would say there’s only four miles to the next stop Then you’d get back on your feet. Once dawn came in I think we were OK – I had said before: ‘If we can see dawn we can see the end’.”
Once they reached Belfast, the atmosphere according to Anita, was one of pure joy.

“It was an outpour of emotion: ‘We did it’. There was loads of hugging – for someone who didn’t know what was going on they were probably wondering what we were at! All the guys who had supported us made their way to meet us. Family were there and colleagues from BT in Belfast had come to meet us.”

They were then interviewed by the BBC for Children In Need.

Anita also thanked those who had liked, shared and commented on a Fermanagh Herald Facebook post, which was a photo of the group in Belfast having finished the trips.
It attracted almost 3000 likes and over 150 comments and messages of support.

“It was fantastic hearing that the Fermanagh Herald had posted a picture of our finish on Facebook and at that stage it was on 1,400 likes. I spent most of Saturday reading the beautiful comments and words of encouragement that people were saying.”

Thanks also went to Dr Grace McMacken, who accompanied the group, the BT Ireland engineers who drove the two support vehicles all the way through the journey (one in front and one behind); BT colleagues who were in the Cancer Connect NI bus with food, equipment and water; BT colleagues from all lines of business in the North. Also thanked were the Valley Hotel for the pit stop; Eamon Kelly from Beechvale Natural Water, Cavanacarragh who provided water; and Asda and Gordon’s chemist who provided first aid kits.
You can still donate at: www.bt.com/pudsey.