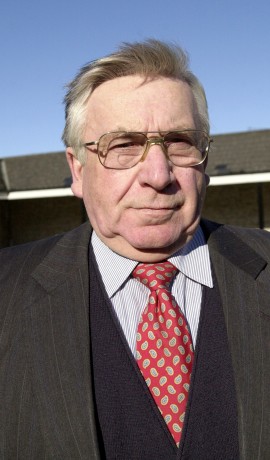 A FORMER chain smoker from Lisnaskea who suffers from a number of lung diseases has spoken of how a life-saving trip to hospital helped bring an end to a 20 year long habit.

Ronnie Farrell, 78, a former president of the Uster Famers’ Union suffers from COPD (chronic obstructive pulmonary disease) as well as other complex, long term health problems as a result of his heavy smoking.

Speaking at the Western Health Trust Board meeting, the farmer explained how he was admitted into hospital for the second time after having difficulty with his breathing in early 2012.

The self-confessed addict struggled to give up smoking, however through a rehabilitation programme and the help of his family he was able to stamp out his life-threatening habit.

Through Telehealth, he was allowed to be treated at home and develop his management skills in which he would take control over his health.

“For me the biggest problem was stopping,” Mr Farrell told the Board.

“When I got home from hospital my wife had dumped everything to do with smoking, including ash trays and anything she thought would help stop me from smoking.

“At the beginning I would walk about 100 yards before I would get out of breath but now I can go for about a mile without stopping and all through rehab. That was the thing that did it for me and they were a real back up. They came out once every fortnight at the start and gave me plenty of encouragement to stop me completely.

Chief Executive of the Board Elaine Way told Mr Farrell: “We probably should be spending more on prevention because we should have stopped you smoking 20 years ago rather than two years ago and you would be enjoying better health today.

“What we are saying is that we should be putting more resources in to keeping people in the community and that means there will be less need for hospital beds. But then we close the beds and the public see that as a bad thing.

“Caring for patients in the community is what we want and why we get better results.”

The Chairman of the Board Gerard Guckian concluded: “Your message is a very good one and it’s our job to listen to you and give the support.

“It’s not always about the hospitals.”