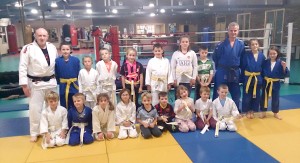 For the past 12 weeks the sport of Judo has come to the town of Derrylin and the pilot project climaxed last Wednesday evening with 13 of its students passing their first grading and three also achieving the Yellow Belt grade.

The Erne Judo Club was founded by Sean Crowley the founder of the Erne Boxing Club, formerly Derrylin Boxing Club.

“The club’s development plan has always been to get more activity in the club on nights that the boxing club is not in operation,” said Crowley.
“We have tried to entice other groups to use our facilities but to no avail. Therefore, we chose to establish a new club and this is how the Judo Club pilot came about.

“My children were all involved in the sport of Judo and I was more than happy to endorse and promote the sport,” he said.
The pilot started at the end of August and to date they’ve had over 45 children try it.

Last Wednesday was a special day when the club reached its first milestone as the club’s first 13 students passed their first grading to earn their White-Yellow belts.

Now the pilot scheme has been extended until the end of the year and they hope to make the club a permanent fixture from 2015.

“We have applied for Sport NI funding for a second time for this project and hopefully we’ll be successful on this occasion,” he added.

“The vision is that the Erne Judo Club will develop quality Judoka players that progress right through the grading structure and hopefully in time we’ll create a few champions over the coming years as well.” added Sean.

The Erne Judo Club operates every Wednesday 6.30pm – 8pm from the Equinox Centre in Derrylin.