Advertisement
HomeHeadlineCross-border still on the agenda for Brollagh school
Advertisement

DISCUSSIONS on cross-border education and the secured future of St Mary’s High School, Brollagh have taken place as recently as three weeks ago.

In June of this year Education Minister John O’Dowd turned down a development proposal to close St Mary’s to examine the  option of cross–border collaboration.

Since that decision was made the minister has revealed 11 meetings have taken place regarding the issue of Brollagh and cross-border education.

A meeting on August 11, 2014 was attended by Barry Jordan, Director of Equality and All- Ireland Department of Education, while Dublin Minister for Education and Skills Jan O’Sullivan attended a meeting with his northern counterpart John O’Dowd on September 18.

The discussions over the five month period have also involved representatives from the Western Education and Library Board, including chief executive Barry Mulholland, CCMS and the Chief Executive of the Donegal Education and Training Board Shaun Purcell. Acting principal of St Mary’s High School, Brollagh, Simon Bradley has also been involved and attended a meeting with CCMS Deputy Chief Executive Gerry Lundy on September 22.

Local Sinn Fein MLA, Phil Flanagan, who asked for an update on discussions in a recent sitting of Stormont said he was pleased that positive steps were being taken.

“Many more meetings and more detailed discussions will need to take place in the coming period to ensure that we explore all possible avenues to delivering the ambitious cross-border proposal that has been envisaged.

“This cross-border proposal is a viable option. It now needs the support of the school community, CCMS, WELB and both education departments in Ireland to make it a reality and ensure that post-primary education is retained in this area. It is clear that discussions around this issue need to intensify in the near future.

“It is important that these discussions are not solely conducted by those in ivory towers running our education system and that inclusive dialogue is opened up with political and community representatives, members of the board of governors and the North West Education Action Group, which has been instrumental in driving this campaign.”

Frank Maguire from the North West Education Action Group explained that a cross-border working group has been set up consisting of civil servants from the Western Education and Library Board and CCMS. This group which is to present to the Minister, is to liaise with the action group ahead of  a November 30 deadline.

He added: “The Minister is looking for a feasible, workable, cross-border solution which is quite positive from our perspective.”

In another development at St Mary’s High School, Brollagh, the recruitment process for a new principal has commenced, with a decision expected in due course. 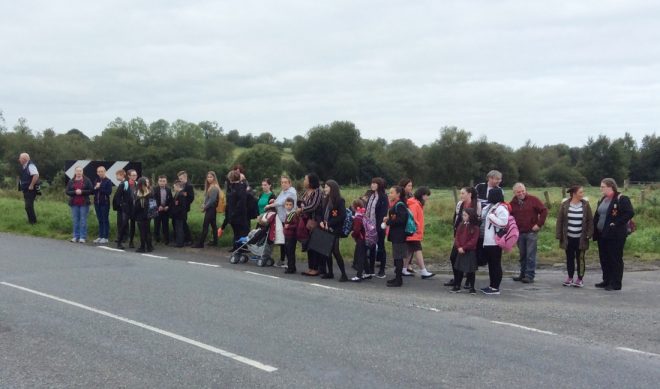