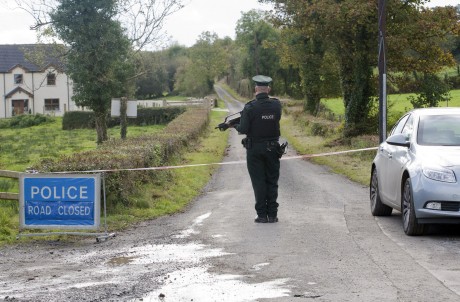 Police on high alert during the security incident at Kinawley

THE DISCOVERY of a major explosives and firearms haul linked to dissident republicans in Kinawley has been described as the work of ‘lunatics’ who have been ‘rejected’ by the community.

Sinn Fein Councillor Barry Doherty, who lives in the area, made his comments following the discovery in a farmhouse in the village last week.

Police confirmed that they believed the find to be linked to dissident republicans, and the councillor described a relief that any potential harm to the community had been thwarted.

“People are aware that there are lunatics in this area that keep following and going down this path,” he said.

Independent Councillor Bernice Swift said: “The reality is there are still people who are prepared to use armed actions in attempting to achieve their aims, this has been an historical situation.”

She added: “The few people who have shared their thoughts with me have talked about the hypocrisy of those who once condone such actions and who now condemn them.”

Also speaking this week was the new area commander of Fermanagh police, Chief Inspector Joe McMinn, who praised the work of police in stopping ‘both the community and police being maimed or murdered’.

On Monday, a 43-year-old man appeared in Enniskillen Magistrates Court on explosives and terrorism charges. The man, Barry Francis Pettigrew, spoke only to confirm his name and that he understood the charges.