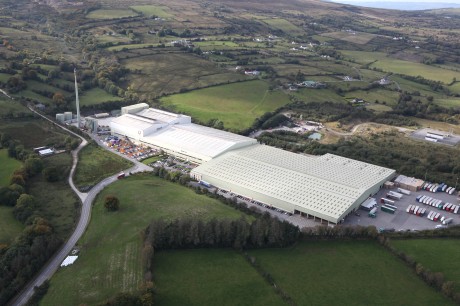 IT IS UNDERSTOOD nine initial bids have been received for Encirc, formerly Quinn Glass, but QBRC is not one of them.

The most valuable part of the manufacturing group built by Sean Quinn is the last part of the empire to be sold off, going on the market last week.

Encirc is recognised as the jewel in the crown of the Aventas Group following significant annual turnover of more than £240m, making it the most profitable business among the former Quinn Group.

The business which employs 1,000 people in Derrylin and in Cheshire, England has attracted keen interest from bidders, but it is reported QBRC (Quinn Business Retention Company) is not one of them.

They are instead ‘only weeks away’ from completing a £72m purchase of the packaging and construction supplies of the former Quinn Group.

It is led by former Quinn Group chief executive, Liam McCaffrey. Its directors have strong backers, among them – according to the ‘Irish Times’ – two long-term investors in Aventas as well as a third financier.

Interestingly, the paper suggests that a private equity bidder ‘might want to team up with them in the future’.

It is believed the bids for Quinn Glass are from a mixture of private equity and international trade investors and are being reviewed by investment bank Lazard. Its spokesman confirmed last week that the sale process had entered its second phase following initial bids received the previous week (Friday, 17th October). He said the process was unlikely to conclude for ‘a number of weeks’.

It is also thought bidders do not include any party with significant glass interests in Ireland or the UK, removing any possibility of competition issues preventing a sale. A sale is expected to be agreed by the end of the year, or January 2015 at the latest.

Quinn Glass was rebranded as Encirc back in May of this year. Both plants are rated among the best in Europe.

The Derrylin plant makes glass containers for the catering/licensed trade market and is the exclusive manufacturer of Bailey’s Irish Cream bottles.

The Cheshire plant additionally bottles various leading brands of wines and spirits instead of shipping the bottles out to the distilleries.