Advertisement
HomeSportSports DigestSwimmingMedals galore in a feast of swimming
Advertisement 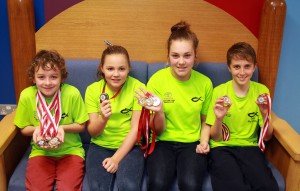 The Swim Ulster Autumn meet took place at the weekend at Lisburn Leisure Centre. Seven young Lakelanders competed in what turned out to be a feast of swimming.

On Saturday the star of the show was the youngest swimmer representing the Lakelanders Oisin McCaffery-McManus. Oisin had a great day winning three medals in each of his events. In his first event he won gold in the 11-year-old boys 200 backstroke in a time of 2mins 56.47secs.

He then went on to win silver in the 400m freestyle in a magnificent time of 5mins 38.22secs. Oisin rounded of a great day by winning bronze in the boys 11-year-old 200 breaststroke in a time of 3mins 33.53secs.

Natasha Love also had a fruitful first day winning silver in the girls 15-year-old 100m breaststroke and later took a magnificent gold in the 100m backstroke in a time of 1min 10.61secs.

Sunday also proved to be a highly successful day for the young Lakelanders. Caitlin Love had a great swim in the girls 12 years 200 backstroke breaking the three minute barrier in a time of 2mins 57.25secs coming 5th overall in her age group.

Caitlin Martin had her first swim of the meet in the 200 backstroke and achieved a time of 3mins 05.06secs in the girls 13 age group despite illness on the run up to the meet. In the 15-year-old age group Natasha Love once again proved what a versatile she is winning gold in a time of 2mins 32.57secs.

In the final session four Lakelanders competed in the 400 womens freestyle. Caitlin Love finished fifth overall in her age group in a time of 5mins 37.18secs taking 11 secs of her previous best time.

Sorcha Lavelle finished 4th overall in a time of 5mins 25.34secs and amazing 22 secs of her previous best!

In her final event Sorcha Lavelle had a great swim in the 200m breaststroke in a time of 3mins 15.58secs, just missing out on the medals.

The 2018 Irish Summer Nationals took place last week in Dublin with swimmers from all over Ireland and Europe...