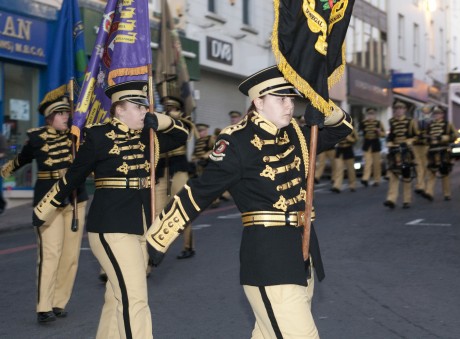 The south Fermanagh Loyalist parade agreed to turn off left at the Halifax to avoid disturbing the Mass at St Michael’s Church, Enniskillen

LOCAL taxi firms were among those inconvenienced by last Friday night’s annual band parade in Enniskillen.

Organised by the South Fermanagh Loyalist Flute Band, it allowed for 64 bands, 2,200 participants and 1,000 supporters.

Such were the numbers, and the chosen route up through Enniskillen town centre that, according to one taxi firm, Enniskillen was a ‘no go’ area or business for around four hours.

It appears that the late (9.45pm) start time agreed with the Parades Commission and the route may have put paid to other people else wishing to get into town.

One young mother told the Herald that her Friday evening routine with her children had to be called off.

“It was the same with all the other mothers. We all went home at 5 o’clock and stayed there. OK, the pubs did well, but shops had to close early and, as I say, the town was closed off to everybody else.”

Publicans we spoke to reported no trouble, and even the taxi firms were philosophical.

One spokesman told the Herald: “We could not do a big pile in the town for four hours, but sure it’s the norm. It’s the same with the vintage car rally. There is disruption but it doesn’t happen that often.”

Another spokesman was equally stoical.

“Yes, of course it disrupted our business. You know yourself, it’s hard to lift people at the best of times, never mind something like this. But we don’t make the rules. We just have to abide by them.”