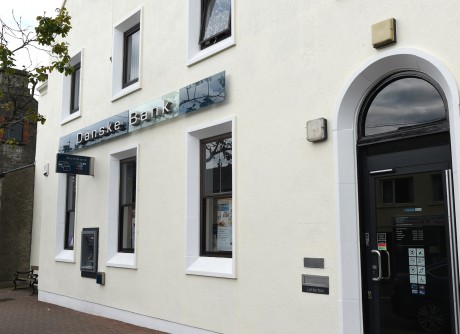 IN A last ditch attempt to save the Danske Bank branch in Lisnaskea from closing, DETI (Department of Enterprise, Trade and Investment) minister Arlene Foster is to hold crisis talks with the bank’s chief executive this week.

The DUP minister said she will be raising concerns about the closure and the removal of an ATM machine.

“I want to understand why they feel the need to close the branch and the reasoning behind this decision,” she added.

“I am particularly concerned about the proposed removal of the ATM, which is an essential asset for customers. I am aware that in the past ATMs have been retained following closure of local branches and I do not see why that cannot happen in this case.”

The bank is due to close on December 5 this year, with staff relocated to the Enniskillen branch.

On Thursday last week local residents, Danske Bank customers and councillors including the DUP’s Paul Robinson and UUP man Victor Warrington, held a protest meeting to express their outrage at the handling of the branch closure.

Customers are now calling for the bank to retain the ATM service in the town which Danske Bank stated would be withdrawn with the branch closure.

The bank also advised customers to avail of Post Office services, but some believe the Post Office is not ‘fit for purpose’ and fear it will be unable to handle the influx of customers from the Lisnaskea area.

He stated: “Those that turned out expressed their disgust at the way they took the decision to pull the branch out of Lisnaskea.

“I doubt the discussion with the minister will be about keeping it open as the bank has already made their decision but if they could retain the ATM services in the town that would help matters.

“There is no confidence in the advice the bank has given to customers to use the Post Office for their lodgings and other services. Several people expressed their annoyance stating that the Post Office is not fit for purpose. With the large amount of cash in circulation in a non-secure environment, it would lead people to believe it’s not of any assistance.

“I must praise the staff in Danske Bank for the courtesy they have shown customers as it is a very disappointing situation.

“A prominent Lisnaskea businessman said he would not be prepared to drive all the way to Enniskillen and that because Danske Bank hasn’t shown any loyalty to customers, he would move banks.

“The Bank of Ireland has been inundated with requests to change banks.”

“We remain in many places where banks no longer exist, ensuring that people have easy access to their bank accounts. This includes Lisnaskea Post Office, where customers of Danske Bank and other banks can make deposits and withdrawals.”