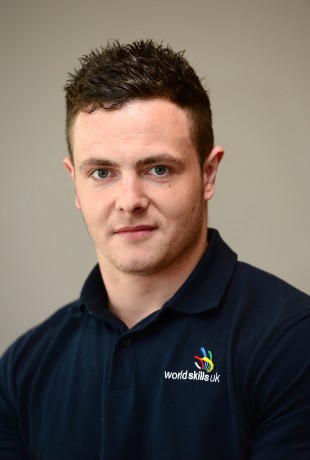 South West College, Motor Vehicle apprentice Declan McGrath, from Belleek County Fermanagh, was named among a 17-strong group from Northern Ireland that will be battling for a coveted place in the final team that will travel to São Paulo for the WorldSkills Competition in 2015.

A SOUTH West College student is setting his sights on Brazil and the world’s largest international skills competition having earned selection for the UK’s WorldSkills squad.

Motor Vehicle apprentice Declan McGrath, from Belleek, was named among a 17-strong group from Northern Ireland that will be battling for a coveted place in the final team that will travel to Sao Paulo for the WorldSkills Competition in 2015.

Held every two years, the tournament brings together 1,000 of the most talented apprentices and learners from over 60 countries, aged 18-25, to show individual and collective technical skills  and solve professional challenges at an international standard of quality.

Team UK at the EuroSkills Competition in France in October. He said:

“It’s nerve-wracking and exciting to be competing at the highest level in international competitions. I’m determined to make the team to compete in Sao Paulo next year and use the experiences at EuroSkills and additional training in the months ahead to secure my place.

“The competitions have helped to sharpen my skills, focus and my career opportunities. Hopefully all the support from the college and my employers at Bundoran Motors, a bit of luck and plenty of hard work will translate into medals and a trip to Brazil.”

Declan’s employer, Kevin Keown, managing director at Bundoran Motors, added: “We are delighted for Declan. He is a very diligent and competent apprentice and has always shown a keen interest in developing his skills and continually tries to challenge himself with modern technologies. All the team at Bundoran Motors wish him every success.”