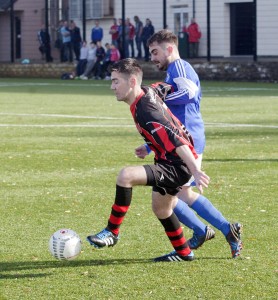 Gaby Jones and Gerald Houston scrapping for the ball in midfield in the Junior Cup match.

This all Fermanagh game in the Irish Junior Cup at the Castle Park Centre saw second division Enniskillen Athletic come out on top of their higher division opponents by a 4-1 scoreline.

Athletic’s Christopher Curry played pivotal roles in all four of his sides goals and Lisnaskea were unable to handle him over the course of the tie. Athletic have been making a steady progress since their formation last year and have secured their place in round three having came from behind to do so.

Rovers on the other hand have seen a massive turnover of players in the last number of months and are currently a side in transition. Some regulars missed Saturday’s defeat through injury which further dented their hopes of a run in this prestigious cup competition.

The hosts did take an early lead but the tie was primarily controlled by Peter Goan’s Enniskillen Athletic side, Christopher Curry to the fore again, the talisman heavily involved once more in his side’s best work.

Curry got down the right and crossed for Dermot Lewsley to level matters midway through the first half. The pair reversed rolls before the interval as Lewsley slipped Curry through on goal to fire his side into a 2-1 lead.

In the second period Athletic continued on the front foot and would extend their advantage when Christopher Curry jinked down the left wing and fed the ball into John Joe Strain, the attacker duly controlled the ball and found the net for 3-1.

Curry would score from a corner to make it 4-1 and over the final quarter the visitors had their chances to extend their advantage while Rovers continued to press and cause some problems of their own however they never looked like mounting a dramatic late comeback.

Winning manager Peter Goan had this to say on his side’s victory.

“We had to come from behind to win this game and I’m happy how we reacted to going a goal down. We are pleased to be in the hat for the third round”

This weekend Athletic meet Enniskillen Santos in a top of the table derby clash at the Lakeland Forum while Lisnaskea go to Fintona looking to ignite their season and claim their first points of the year.