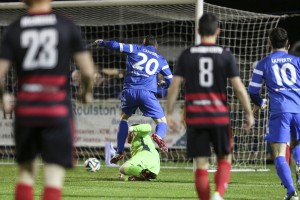 A WEEK can be a long time in football.

No-one will know that better than Ballinamallard manager Whitey Anderson after Ryan ‘Rocket’ Campbell fired his team to a second league victory of the season at home to Coleraine on Friday evening.

Seven days earlier the Mallards hit rock bottom when defeated 2-0 by fellow strugglers Warrenpoint Town, however a week on everything in the Ferney Park garden is looking somewhat rosier following Friday’s evening’s richly deserved win over the Bannsiders.

Buoyed by a midweek Wasps Solutions League Cup success at Institute, the Mallards produced arguably their best team performance of the season to carve out a precious victory that lifts them out of the basement and above both Dungannon Swifts and Warrenpoint Town.

A trademark Campbell finish on 50 minutes proved decisive as the Mallards continue their remarkable ten-game unbeaten record against Oran Kearney’s men since joining the Premiership.

If anything Coleraine probably shaded the early exchanges on Friday evening with their lone striker Mark Miskimmin firing inches over from distance.

Shortly afterwards the visiting supporters were claiming for a penalty when Mallards defender Chris Crilly appeared to trip Miskimmin as he sprinted down the left channel.

Referee Andrew Davey was unmoved as he was some time later when Liam Martin was sent sprawling under the challenge of Howard Beverland.
By now things were beginning to hot up as Jason McCartney steered wide of a gaping net after Anthony Elding had nodded down a Mark Stafford free kick and Martin’s initial effort had been blocked.

Back at the other end Aaron Canning fizzed a 25-yard volley just over before McCusker thwarted McCauley for a second time.

The Mallards though were beginning to crank it up and shortly before the break Johnny Lafferty, who had replaced the injured Elding on 28 minutes, just failed to get enough purchase on a Campbell cross from the right.

The home side picked up where they left off on the resumption and five minutes in Lafferty ushered Campbell, pictured below, down the right channel and the former Dergview sharpshooter drilled low and hard across Doherty.

Campbell’s trademark finish brought an inevitable response from the Bannsiders with Canning connecting with a Neil McCafferty corner kick at his near post but the full back failed to get enough power or direction on his shot to trouble McCusker.

McCusker, who had excelled between the sticks throughout, then got down smartly to deny Miskimmin, after the striker had been picked out by McCauley from the left bye line.

Miskimmin and McCauley followed up with further attempts but again McCusker was equal to the danger as the home side finished with something of a flourish.

Eight minutes from time Lafferty should have killed off the visiting challenge but the former Tyrone GAA star fired into the side netting after Doherty had saved Martin’s initial effort.

And right at the death Doherty again got the better of Martin after Mallards skipper Stafford had nodded down a free kick from substitute Davy Kee on the left.