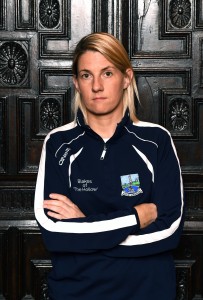 Fermanagh manager Lisa Woods is looking forward to the All Ireland final.

THERE’S a steel about Fermanagh this year. And when you meet Lisa Woods you get a fair idea where it might have come from.

Lithe and brisk in her manner, she’s a direct, forceful speaker. She’s controlled too, just like her sideline demeanour. There’s no chest pounding or heart-on-the-sleeve carry on. It’s just business.

Woods had been following Fermanagh from afar for a few years now. She taught in Enniskillen, so she knew a few of the girls that way. She coached Brookeborough which gave her another angle. She knew there was great quality out there.

She felt it was her time. So she stepped up to the plate and took her place at the helm of the Fermanagh ladies.

Woods been with her team for nine months now, since they first came together back in January. It has been an intense time, with no let up, training twice, three times a week, every week. But it’s all been worth it to secure that day in HQ.

It doesn’t come as a surprise when Woods states her aims early in our chat. She’s clearly goal focused, all about the results.

“One of my main aims was to bring a new fresh approach, a little bit of professionalism to it,” says Woods. “I had two aims at the start of the year. One of them was to bring new players on board. I’ve done that.

“The second aim was to get to Croke Park. Done that. I’m not stopping now. There’s 60 minutes of football left and they can do it.”

Woods background in schools football has given her a deeper take on coaching than many might have. There’s the diet, physical conditioning and all those myriad factors that give you the inches that count in the big games. She characterises her philosophy as a fresh approach, with an emphasis on youth. The starting 15 will have about four or five players in their first year playing county.

She appreciates the importance of the mental game and having the head right. That’s why she got Derry man Paul McIver on board to give a little psychological guidance where necessary.

“That’s not something that would have been done before [with Fermanagh],” says Woods. “I work with Paul, so I know what he’s like. He’s worked with teams and built very close relationship with them. I just felt it might give them that edge and it’s worked. The girls have been very happy with him.

“To be fair some of these players are coming back to this panel this past ten, 13 years and sometimes you just need something different and I think he’s brought that.”

But then serendipity has played its part too. Woods is coming into a squad with that perfect blend of youth and experience. Women ready in themselves to make the next step, with a jag of youthful zest to help carry the collective along and nourish competition.

“They’ve been there or thereabouts for a long time,” said Woods. “They’ve been knocking on the door and they should have been in Croke Park several times by this stage. But they were always just missing something.

“Some of them didn’t make it out until during the league, but to be fair to them they made the right decision. I spoke to them and brought Aidy on board, spoke to them about the changes we would bring in, the new players we wanted to bring on board and they just felt that it wasn’t all just about them, there were other players as well. We’ve a great squad at training. We’ve had 30 out and we’ve only whittled that down to 25 due to commitments with going abroad one thing and another.

The blend of youth and experience is echoed in the management. While Woods brings a neophyte intensity and enthusiasm, Aidy Little supplies a depth of knowledge to the set-up, providing valuable advice and insight and an extra pair of hands. Woods might be new to inter-county management, but she wasn’t going to make the rookie mistake of taking it all on herself. But she remains firmly in charge, making the big calls.

Indeed, in a year of firsts for Woods she has handled herself with a preternatural surefootedness. The manner in which she approaches the final is of a piece with her tenure to date.

“After we won the semi-final I spoke to the girls and I said to them you will go through a week, a week and a half when there is going to be a bit of a circus going on and you will be in the thick of it, but that’s fine,” said Woods.

“But you’ll be training and you’ll be training hard. The girls have never trained as hard as they did last week. I did say to them, after [Last] Monday night that’s us, it’s our time, it’s the team’s time. To be fair to the county board committee have been superb. They’ve taken over all the fund-raising, organised everything.

“I’ll be saying to them and reinforcing it in every single training session, that’s it, it’s not about the circus, there’s no point getting to Croke Park unless you win it.”

It’s still a heady time though. There are just days left now and training will be tapering off. It’s all about getting the body right, getting the head right, imbibing tactics and contingencies, preparing for the big day. With so much unprecedented to contend with on Sunday, in some respects Woods is almost glad to be facing the Mourne girls on Sunday.

“I think the fact that we know Down is a big help,” said Woods. “We know them, they know us. It’s about getting the tactics right on the day. They’ve some key players, as do we, indeed I would say we’d have far more. On paper I would say we are the stronger team and I would always have said that. But its getting it right on the day. Down are a big physical team.

“We’re faster and more nippy and we do play that quick ball and that’s the way we play football.

“There will be nerves on the day. I’d say both sides will take a good 15, 20 minutes to settle down. Once that happens the feelers will have gone out and the girls will know where they stand. I think if we keep with Down in the first half we’re going to nail that second half.

“I think with Down being the opposition, we know them, they know us. If they make a move, we will probably make a move and that’s the way it will evolve and it will come down to who wants it most at the end of the day.”

And as she speaks those words you can’t mistake determination in Lisa Woods’ steely blue eyes.