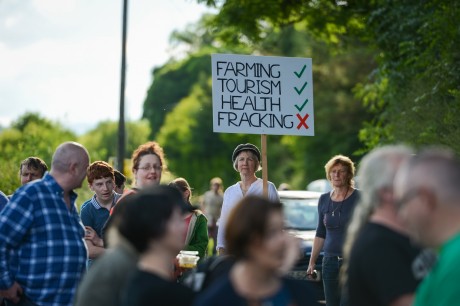 The licence granted to Fracking company Tamboran has expired today (September 30), without an extension.

The Department of Enterprise, Trade and Investment (DETI), head by Minister Arlene Foster, confirmed this evening (Tuesday) that Tamboran’s licence, would not be extended.

The petroleum licence had originally been granted in 2011, with Tamboran required to inform DETI of their decision to ‘drill or drop’ in three years. It had been extended by six months in March of this year.

This latest development comes after Tamboran had attempted to drill a bore hole to collect rock samples near Belcoo during the summer. The proposal to drill there was rejected by Environment Minister Mark H Durkan, and the company has sought a judicial review of this decision.

The company have also sought a judicial review of the decision by DETI.

A spokesman from DETI said:

“In March 2014 DETI granted a six months extension to Tamboran Resources (UK) Ltd in respect of Petroleum Licence PL2/10.  This had the effect of protecting the Licence from automatically determining on 31 March 2014.

“This extension to 30 September 2014 was granted by DETI and accepted by the Company, on the basis that it would enable Tamboran to complete Part I of its work programme by that date, including drilling of a stratigraphic (test) borehole, and to decide whether or not to proceed with carrying out Part II of the work programme within the initial 5 year term of the Licence (31 March 2016) or to relinquish the licence.

“The company has not completed Part I of its work programme and Petroleum licence PL2/10 will determine  (expire) on 30 September 2014.”

And, a statement from Tamboran Resources UK Ltd said:

“Tamboran Resources can confirm that it has instructed its Lawyers to judicially review the decision by the Environment Minister Mark H. Durkan announced on 11th August to reject its submission to drill an exploratory borehole under existing Permitted Development rights.

“The company informed the Department of Enterprise, Trade and Investment (DETI) of its intention to seek a judicial review into the decision by the DOE and requested an extension to its existing work programme to accommodate this course of action. After investing in excess of £3 million (US $5 million) to date, we are disappointed that DETI failed to consider the option of a temporary extension pending clarification by the Court as to the timelines for the judicial review. This decision as it stands could close the door on a project that could deliver up to 50 years of secure energy supply, in excess of 2,000 jobs and billions of much needed investment in the local economy.

“We have consulted with counsel and we are also moving to a judicial review of DETI’s decision. It would not be appropriate for us to comment further at this stage.”