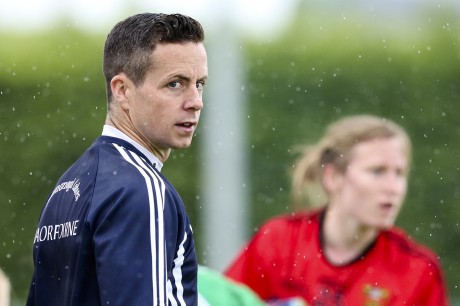 Fermanagh’s assistant manager, Aidy Little, refused to get carried away with the team’s marvellous performance in beating Waterford and reaching another All Ireland semi final.

Although conceding that ‘everyone of the girls were just brilliant’ he was quick to reiterate a point that is becoming something of a theme for this Fermanagh team;

“It is just a case of one game at a time. We look at the win as another step, that is all. No-body will remember that win after this week. All that matters now is the next game.”

And that next game is Roscommon in the All Ireland semi final on Saturday week at a venue and time to be confirmed. Little knows that the Erne girls are in for a tough battle.

“We played them last year in Clones in the quarter final and although we came out on top they gave us a very tough game. They are nippy and dangerous and we know that we will have to play to our best to get the win,” he explained before adding,

“We will just get down to training now. Three sessions this week and two more next week and then on to the game. The win was great and there is always a great high after a game like that but it is forgotten now and we move on.”

On the win against Waterford Little felt that it was the superior fitness of the Fermanagh girls which was a key factor in the win.

“We spoke before the game that if we were close with ten or fifteen minutes to go that we would be able to push on and take the win and that is the way it panned out. We knew we were going down there without many people giving us a chance but we just wanted to go out and play and perform well and that is what we did.”

Little’s sister and influential Fermanagh forward, Caroline, had to leave the field of play after 15 minutes with a facial injury and although she returned for the last 10 minutes it was pleasing to the management to see so many players ‘step up’ without their inspirational attacker on the field.

“Caroline, like all our players, is very important to us but I suppose with Caroline going off we needed others to step up and everyone did and that was very good to see.”
Fermanagh are really hitting their stride now and while the starting 15 are real quality there is also plenty of excellent options on the line as well.

“We have really only settle on a team in the past five or six weeks but what we have found is that we have people on the bench who can come on and make a real difference and carry a real threat and that is great to have,” Little said.

Just one more step from Croke Park and another crack at the Intermediate All Ireland title but this squad won’t be thinking of the Jones’ Road venue and instead will be looking at Roscommon and clearing one hurdle at a time.