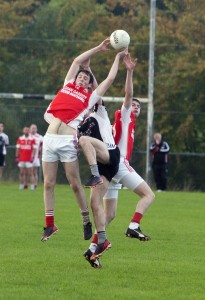 Mark McKenzie wins this ball on the stretch for Belnaleck

Aghadrumsee powered their way into the division three league decider with a hat trick of goals that left Belnaleck far in their slipstream at the finish of this lively tussle played at Maguiresbridge on Saturday evening.

The first of the Aghadrumsee hat trick was perhaps the most crucial for it hauled the side back into a contest that looked as if it might be drifting away from them.

Belnaleck had been slightly the sharper side over the second quarter and the MacMurroughs, despite being absent one of their top forwards, Ciaran McBrien, were edging out into a reasonable lead as the break approached.

But just on the stroke of the interval whistle, Belnaleck’s lead was trimmed as Aghadrumsee plundered their opening goal.

Corner forward Stephen Flynn had done well to keep a ball in play on the end line before slipping a cross over to Ryan Boyle and he sidestepped a defender to smash a close range shot home.

That left just a point separating the sides for the turnover and though Belnaleck were first to score on the resumption, the initiative had been wrested from them.

Aghadrumsee had been boosted by Boyle’s strike and when Eddie Courtney found the net again for them five minutes into the half, the game had taken a decisive turn.

From there to the finish the game was to be increasingly dominated by Aghadrumsee.

In fact the winners had opened the contest the brisker with quick scores supplied by Stephen Flynn and Eddie Courtney but they then sagged around the middle of the park where Sean Lewisley and Lee Cullen were performing well for Belnaleck.

Points for Belnaleck duly came from Dermot Lewisley and Christopher Owens with a marauding wing half Mark Gallagher pushing forward to shoot them into the lead on 15 minutes.

Courtney levelled the match but Belnaleck then embarked on what was to be their best spell of the 60 minutes, four points rapped over, two from Dermot Lewisley and a single each from Joseph Heavey and Christopher Owens.

The point from Owens was created by excellent work from Gallagher who had again raided forward.

But Belnaleck had the wind taken out of their sails by Aghadrumsee’s snap goal on the break and though Mark McKenzie popped a quick point for them on the restart they had lost some of their zip.

Courtney’s goal jumped Aghadrumsee into the lead and with a point each added by Eugene Kearins and Courtney the game was now moving firmly in Aghadrumsee’s favour.

Kane Connor picked off a much needed answering score for Belnaleck as the game headed into the final quarter and the chasing side did manage a spurt of pressure.

But Connor was denied a goal when he fired a hard shot too directly at Aghadrumsee keeper Peter Phair and Conor McAuley wasted a simple placed kick.

Aghadrumsee rode the squall and over the final ten minutes they were again in command as the Belnaleck challenge faded away.

Ryan Boyle was in the right spot to volley home a ball which had cannoned back off the base of the Belnaleck upright and in the run in to the finish the leaders rattled over three further points to coast home.